Last year I started a tradition for my birthday, and by "started a tradition" I really mean it accidentally happened, of doing something I would normally never do the rest of the year for my birthday. It wasn't a milestone birthday, unless 35 is now considered the beginning of the end. It just so happened that several people recommended we go to a performance of Sleep No More which was one of the best experiences I've had and certainly not something you experience everyday, unless you are the type to wander through a 1920s hotel, following characters as they play out one of literature's greatest tragedies. And who knows? Maybe you are.

Anyway, this year my sister gave me the gift of a ticket to a museum "dream over" at the Rubin Museum of Art. The idea behind this event was to fill out a questionnaire ahead of time and have a piece of art work chosen for you to sleep next to. The idea was that you would dream and then to have your dreams recorded by what turned out to be members of a Jungian institute for sleep and dreaming studies. The crux behind the whole event was twofold: to have a spiritual connection with a piece of art and to have your dreams recorded by these researchers for the purposes of their research. And secretly for me, to sleep in a place that is usually forbidden after hours.

So yeah, not a typical way to spend a Saturday night much less a typical birthday gift.

The art in the museum is Himalayan Asian and as a result is heavily influenced by Buddhism and Hinduism. I was interested in finding out which piece had been chosen for both me and my sister as we were to be given separate spaces and the questions we were asked were intriguing. I don't really know what I expected to be given but I certainly did not expect what I got. Here's a photo of the exact piece that was chosen for me: 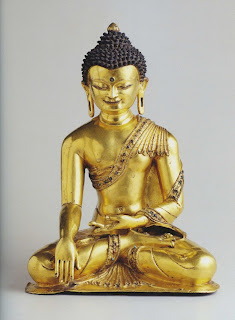 For those who don't know, that is a statue of the Buddha nee Siddhartha aka the Supreme Buddha as he is achieving enlightenment. As explained to me, the position he is in here shows one hand open and palm up in a gesture of openness and receiving and one hand is touching the earth with his fingertips. At the moment of his enlightenment, the story says, the earth roared acknowledgement of him as he touched it with his hand.

After setting up my sleeping bag and other accouterments  my "storyteller", a young and handsome fellow named Michael introduced himself and told me he would be reading me a story at bedtime and that it would be something he had chosen to go along with the art work and that it would hopefully help me along in dreaming. He also told me about the piece and with every new detail he told me, I felt it resonate with me. I struggle with the notions of being both open and grounded at the same time. I have a tendency to view things as either practical and rational OR idealistic and irrational. Open vs. closed. I don't do it intentionally, I just feel that, especially in recent years, I've gotten so cynical and the lines between truly open to newness, new experience, new points of view has gotten confused in my head with being a realist, being a pessimist. And sadly enough, I walk the line between being ironic or sardonic about everything. It is wearing me down, I know this. For me, becoming enlightened would mean achieving and truly believing that both are not mutually exclusive.

I then walked over to where my sister would be sleeping and for her they had chosen a very tiny statue of a Dalai Lama from the 17th century. Here is her photograph of it, replete with her signature eye for photographing objects (please note the amazing blue ghost-like reflection in the rear): 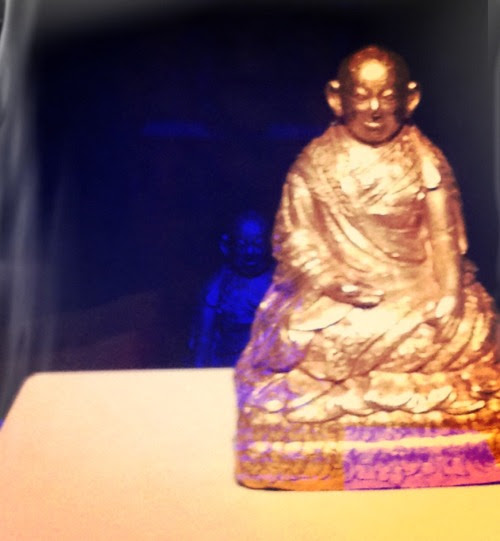 My sister is one of those people for whom openness often comes naturally. She felt at home in the museum among all the objects and, as she usually does, she put me at ease being there and after seeing her chosen art work, I was ready to get started with this whole experience. I noticed two people who ran into each other, both surprised to find the other there. I wondered what it must be like, to run into someone you knew in a place like that, what it would be like to not know that someone you knew would be interested in doing something like this. It seems like it would be comforting.

After everyone had set up their bedding which was scattered throughout the six floor museum, we were to meet in an auditorium while some talks were given. One of the speakers was a neuroscientist from Harvard who studied the brain activity of people while they slept. She spoke about the Western approach to dreaming and learning from dreams or what science could teach us about brain activity during dreams. She was dressed in this purple flowing robe and seemed more like a mystic than someone who teaches at Harvard but what she discussed was very interesting. She touched on the idea of lucid dreaming which is always something that has fascinated me and I secretly hoped that I'd be able to have a lucid dream there in the museum. After she spoke, there was a Tibetan monk that answered questions about the Buddhist  way of dreaming and what dreams mean in that religion. The two ideas were not so different though clearly one was more spiritual than the other and one put more stock in the actual dreams than the other. Interestingly enough, both  allowed for the idea of lucid dreaming, a way of finding answers to waking life problems directly through one's dreams. That idea seemed so beautiful to me that I couldn't really concentrate on much else.

On our way out of the auditorium, the monk gave us each a seed to eat.  For the life of me, I cannot remember the purpose of this but I ate it anyway because it was a gift. I pictured broccoli florets growing in my lungs. I don't know why. We then gathered for a discussion with the other dreamers on our floor. It was basically an introduction to each other and a brief talk about what to expect and what not to expect and I suppose to just get a sense of what people's thoughts were about the experience. We would meet again in the morning to talk about our experiences. This first meeting was fraught with what most first meetings usually are: awkwardness, insecurity and discussion dangerously close to disagreement. I was grateful it was only a 30 minute meeting since I felt myself grow very sleepy by 11pm.

I was a little concerned that I wouldn't be able to stay asleep because even though I fall asleep easily, it takes very little to wake me up. Michael came back to read me my story and he explained that he picked a Wallace Stevens poem called Sunday Morning to go along with the statue since achieving enlightenment seemed so big that it was virtually incomprehensible. He felt that the images in the poem were big enough to communicate that. To wit here is sampling of one part of the piece:

Deer walk upon our mountains, and quail
Whistle about us their spontaneous cries;
Sweet berries ripen in the wilderness;
And, in the isolation of the sky,
At evening, casual flocks of pigeons make
Ambiguous undulations as they sink,
Downward to darkness, on extended wings.


I'm inclined to agree with him.

So I fell asleep easily but woke up a few times throughout the night with my traditional "where the fuck am i?" notion that often visits when I'm sleeping in place not my own. But I fell easily back to a deep sleep. And I did dream. I dreamed amazingly colorful, vivid intense dreams. I'll keep these to myself because unless you are at a dream over in a museum with a bunch of other dreaming people, most people don't want to sit through a session explaining what goes on your unconscious brain. Suffice to say that I woke up peacefully and completely grateful for the experience.

We woke up to have a traditional Tibetan breakfast which consisted of fruits and nuts and this dough ball with cinnamon that again, I cannot remember the name of but that I really enjoyed. Most of the other people looked dazed and still asleep and the meeting with the other dreamers on our floor was strange. People were reluctant to share their dreams or their thoughts but I chalk that up to drowsiness. We were all asked to draw one image from our dreams on these small pieces of paper that the organizers then hung up at the entrance of the museum like Tibetan prayer flags. It was pretty remarkable to see what people had dreamed and how they illustrated it.