Brussels day 2: The Waft of the Waffle

So where was I? Oh right, I was fast asleep in Brussels, belly full of mussels and visions of beer bottles dancing in my head. The morning was chilly and cloudy but I was happy. Through each and every decision and coincidence that had happened in my life up until that moment, I found myself in Belgium. It was, therefore, time to ponder some other surrealisms for awhile. To the Magritte museum!

Here are some photos I took during the walk from the apartment to the museum: 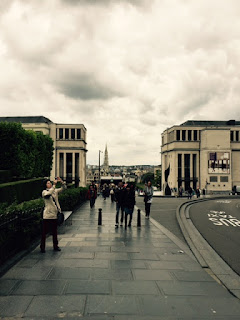 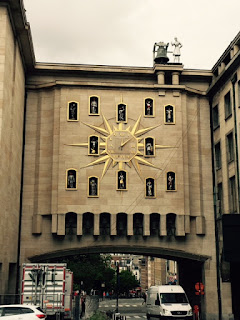 I also took a lot of photos of buildings that could have been ancient wartime strongholds or they could have been the Belgian equivalent of a CVS...I know not. I just know that Brussels is full of beautiful buildings.

My favorite Magritte painting, The Lovers is at the MoMA but what could be better than seeing a lovingly curated set of work by an artist in his home country? I wasn't disappointed. This collection incorporates a lot of biographical information and a decent amount of early work and sketches. It is always fascinating to me to trace the development of an artist through their own work. I got the audio guide, which was exhaustive and which also alerted me to a fact I hadn't known before: Magritte insisted his work didn't contain any underlying meaning. In fact, he bristled at the notion that there was any symbolism at all in his work. I mean, fair enough but walking around the museum, absorbing the vivid and intensely surreal legacy Magritte left behind, I felt depressed thinking that it didn't mean anything. So I've decided to believe that his insistence that it didn't was part of the symbolism of the work. I realize that might not make sense but we are talking about an artist who painted this:

Next on the agenda was a beer tour. After leaving the museum, we had about half an hour to get to the meeting point for a four hour beer tour and, guided by the sights and smells of the Grand Place, we decided to get our first street waffle. The Grand Place was busting out all over. Seeing all the tourists and hearing the sounds of a hundred different languages spoken is one of my favorite memories of the trip. Then, when the waft of the waffle beckoned, I answered. We stopped randomly at a corner vendor and ordered two liege to go. Not being fancy with sweet foods, I got mine plain; it was my first time after all, I needed to go slow. Below is an accurate dramatization of me after I took my first bite.

It is now and shall remain one of the top three things I've ever eaten. It was so good, in fact, that I tried many many times during the trip to repeat that first taste. However, repeating that first taste was really just chasing the dragon. Here's me eating one early in the morning after a very late night, also on the streets of Brussels: 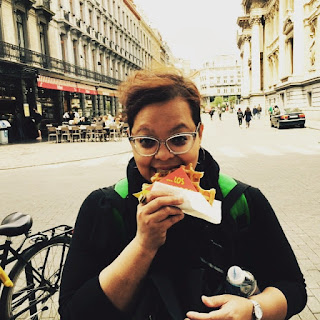 It was difficult to move and keep going with life after eating that little bit of other dimensional heaven in a thin paper sleeve, but I managed. We made it to the meeting spot for the beer tour just in time.

I have always been a fan of Belgian beer and taking this tour was the top thing I wanted to do in Belgium. Aside from the beer tastings (and I should emphasize that "beer tastings" really meant "an entire bottle of beer, many of which were 8% alcohol and higher), we would get to take a walking tour of the city and visit old pubs and local hangouts. Our tour guide for the day was a very knowledgeable, very handsome and very friendly man named Archimedes. He was born and raised in and around Brussels and even though this was a prescribed tour with stops specially chosen ahead of time, the tour felt like just hanging out with a local.
Our first stop was the Theatre de Toone, one of the oldest pubs in Brussels which, although I don't have exact years, is probably really, really quite mad old. (That's a very official guess.)

Here's a picture I took and one of the first beers which was and remains my favorite beer of all time: Orval.


Our tour group had about 15 people in it, all from different places in the world. The great/terrible thing about this tour is that there was a lot of beer involved. Great because it was Belgian and we were in Belgium; terrible because, fueled by only one albeit superior waffle, sloppy drunkenness was inevitable. Like most things that happen after day drinking, there was an air of absurdity to everything after a specific, at the time, unnoticed moment. For example, we passed this en route from one bar to another: 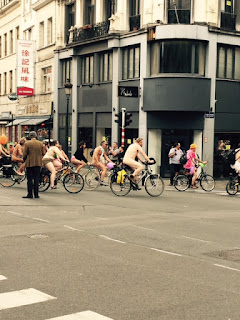 Those people are topless and/or naked. I would have thought this a false memory but my camera does not lie. The afternoon carried on as it does while drinking with new friends and I had a wonderful time talking and tasting and learning about beer. Archimedes also threw in a lot of fun historical facts about the places we walked by and the pubs we visited. He also had bee stung lips. Did I mention that?
Anyway, here's a picture of me and Lauren at the last stop:


The beer in those glasses was the last one of the tour. It was 11% alcohol. What followed after that snap was taken is best recounted in bulleted format, mainly because that is how I "remember" it: in vague statements of memory as opposed to a coherent plot with a beginning, middle and end. Think of this as slightly longer tweets. So here's what happened, as I recall: 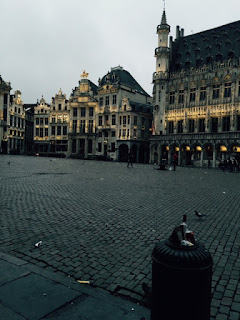 We were due to leave the next (or that same) day and head off to Bruges for a night on our way to Amsterdam. So it was time to sleep for a few hours before leaving beautiful Brussels. I know I promised the peeing boy statue but that will have to wait until part 3: Goodbye Brussels/Hello Bruges, the continuation of a series that I'm positive no one in their right mind is still reading.