Over the past weekend I attended a bachelorette (why does blogger make that a misspelled word?) weekend for one of my besties and an assorted crew of women from all walks of life. Not being in any way ordinary, my friend chose to go away for a murder mystery weekend in beautiful Jim Thorpe, PA. If you don't know about/haven't been to Jim Thorpe, you should. It is a small, small town in eastern Pennsylvania with a storied history and colorful locals. We stayed here: 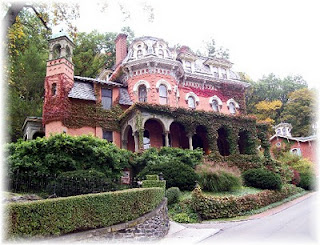 at the Harry Packer mansion, erstwhile home to one Harry Packer, son of Asa Packer, coal baron and all around big wig. Actually, I found the story of Asa and Harry Packer quite interesting but suffice to say that they were father and son and they were incredibly rich and they lived next door to each other along the steepest hill known to man. Some words exchanged while climbing said hill in various states of inebriation and food coma are as follows:

"I'm so out of shape."
"Man, I need to rest."
"My hamhocks hurt."
"I shouldn't have eaten that entire crab cake."
"I'm detoxing on Monday."
Silence...apart from heavy breathing.

Harry Packer died when he was just 34 and it may or may not have been a direct result of climbing that hill to get home. But I digress.

We had reserved the carriage house because even in this day and age, we aren't really "main house" people. I, of course, speak only for myself. The carriage house had five rooms and we had four of those booked for the eight people at the party, necessitating our sharing the fifth with a couple of strangers. Due to the murder mystery goings on we had the opportunity to talk to our carriage house mates and get a good look at them. They were a couple away for the weekend, the woman shared my sister's name, which was odd and the man was about 2 years away from being the old pervert that everyone in the neighborhood goes out of their way to change their schedule arond in order to avoid passing conversations. But they were nice enough and I really didn't see them at all aside from the murder mystery sessions of the weekend. And they didn't see any of us. This didn't stop the pervy older man from saying stuff like "So you gals didn't make too much noise last night. I guess the stripper was late." In fact, there is something about the words Bachelorette Party that send people's (in particular people beyond a certain age) imaginations into orgiastic paroxysms, imagining Caligula's den despite seeing the participants in broad daylight, being told they are all (way) older than 21 and discussing fine wine, children and professions merely hours before. Over the weekend we heard comments and were asked questions by all the anniversary celebrating older couples in attendance. It reminded me of how pervy everyone is. Again, digression.

After settling in, we took a walk around town to get some lunch and explore. We got some booty pictured here: 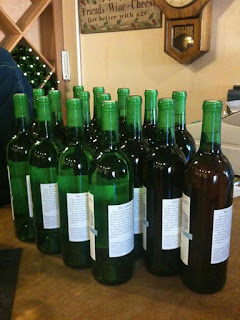 That was to take home people. Didn't I just tell you how tame we all are?
I also bought some rather delicious hot pickles, the thought of which is currently making me salivate. We ate a lovely lunch at a restaurant called Crave which was situated, as most things in Jim Thorpe are, inside an old mansion. Whilst there we drank pumpkin martinis, pumpkin beers and wine. Because we didn't just buy a case and a half of wine. Oh and also we had to finish up lunch so we could go back to the mansion and participate in a wine tasting. I'm starting to think my blog should be titled "After So Much Wine Girl." Thoughts?

The wine tasting was enlightening, the small town wine distributor was worldly and knew what he was talking about and most importantly he left the bottles out after the wine tasting and enabled us to serve ourselves. A particular highlight of this event was looking over at Marianne, the bride to be as she caught my eye and slowly mouthed the word "Balls." This was a throwback to a private joke that took place in the van on the way down to PA (oh who am I kidding, the word balls is bandied about in our group of friends.) and it was triggered by the man running the tasting saying it in context. Seeing my friend's happy face as she mouthed the word balls for some reason just sent me into a fit of laughter. This resulted in a nice, quiet state of drunken happiness. Which was just what was needed for the intro to the murder mystery story.

The mysteries that they do at the Harry Packer mansion really play off the setting and from what I understand they all feature real historical figures and members of the Packer family as main characters. The purpose of that first night was to get our character assignments. I was assigned the wife of an explosives magnate based on a real life man who may or may not have caused the deaths of 200 Irish immigrants and coal miners. Without going into a long detailed description about the murder mystery game, suffice to say that a cook named Brumhilde was dead and we all had to find out why/who. Like I said, I was drunk but it was fun!

After our character assignments we went back to the carriage house exhausted and sat up talking and snacking and general catching up, well most of us anyway. Our plan was to tour the town the next day and come back in time for rounds 2 and 3 of the game and dinner. So we went to bed with nary a penis in sight.

The next day we were able to have breakfast on the porch of the beautiful mansion that overlooked the mountains on the clearest, bluest day in a long while. The town was having a fall harvest festival and we had been warned the previous night that it would be "mobbed" and to our city sensibilities we doubted. Sure it will be mobbed but mobbing is relative. Yeah, no it was mobbed. Not unpleasantly of course but still. After wandering around the three or four blocks that comprise the town we drank some more and ate some more and then climbed back up mount Everest to nap and refresh for the evening. All in all, not too shabby a way to spend an afternoon among friends.

And then we had a quick round wherein more secrets were revealed and none of us were any closer to figuring out who the killer was but although he was rather long winded, the leader of the game was really knowledgeable about local history and he was adept at creating the mystery. He just needed to stop talking after awhile! Also he looked like this: 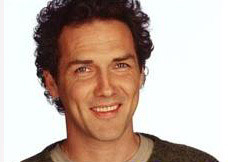 Which was odd considering one of the other participants looked like this: 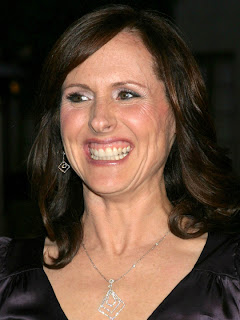 True story.
Dinner was delicious. Our group was seated at a long table. On one end some of our group were really, really involved in their cell phones and on my end of the table, I was sat next to a mother and daughter, cousins of the woman who could be confused for Molly Shannon. They were cute but you could tell the daughter was very embarrassed by her mother as evidenced when the mother said "I really hope I don't get a lot of gas from this food." and the daughter said "Please! Please stop it." Guess what else we did? We drank more wine!
As a side note, the mansion has its own "bar" which was really a table with a lot of booze that was called the LIBATIONS LOUNGE. This was to the dismay in particular of my sister and Dana S. who conjured the word labia each time libations was brought up. I know they are both reading this so this is for them: LIBATIONS.
After dinner we all gathered to find out who the murderer was and to my own personal disappointment, it was someone I had completely forgotten about in the game heh. But the game guy brilliantly gave us a bunch of false endings a la Peter Jackson and those made me chuckle. I have to say I really enjoyed the murder mystery. I just kind of wish I'd been more sober for a lot of it. Funnily enough, that's how I feel about all four years of college.
Anyway we went back to the carriage house energized and five of the eight of us went out for drinks in town while three of us stayed home and looked at cell phones and magazines. I think you probably know who had more fun. While at the bar we ran into Norm MacDonald, a very friendly woman who waved vigorously at us but none of us recognized, a father and son from Long Island of all places, some lovely pinot noir and a handful of friendly locals. Jim Thorpe is a lovely town!
Stumbling back up the hill in utter silence due to our inability to breathe comfortably it occurred to me how lucky I am to be living the life I live with the people I live with and among. Maybe it was the wine but I just felt happy to be able to be with a friend, celebrating the fact that she found someone great to spend the rest of her life with, something that is both natural and awe inspiring in the same breath.
The next morning was breakfast on the porch again. I was a tad bit hungover but nothing terrible and we decided to visit the famous jail that is in Jim Thorpe. It was the scene of the hanging of four members of the Molly Maguires. Google it, lazy people! The jail is also said to be haunted. It certainly was creepy enough for me to believe it was haunted. Our tour guide was 15 and spoke too quickly so I tuned out a bit of what he said. The coolest part of that tour was seeing this: 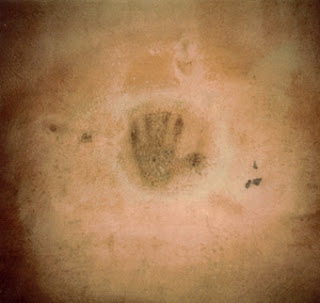 The hand print that does not disappear, even after several attempts over the last 200 years to remove it from cell 18. Again, Google might be your friend here.
After the tour we wanted to eat something for the long drive home and unfortunately chose a Mexican place in town. Scratch that a Mexican place in a town that had two Hispanic people in it, myself and my sister. The food was horrendous but the company was worth it.
Thoughts on Jim Thorpe? I'd go again. Thoughts on murder mystery weekend? I'd do it again. Maybe in a haunted mansion. Thoughts on my soon to be married friend? I love you and hope you had a good weekend, despite the fact that there were dicks, but no penises!
Peace out!
Posted by Allison E at 2:47 PM