These trains are the color of sadness and bad pornography

Today is Monday but it feels like the first Monday that ever was. I attribute this to the fact that I had what felt like the longest head cold/cough and viral infection that ate up nine of my days. And normally I would not have cared but it arrived just in time to mar Thanksgiving and my sister's birthday celebrations. Wah wah wah. You guys, it is HARD living in the first world. Regardless, by Wednesday I felt not unlike Ray Miland, circa 1945, without the effort or detriment of ingesting large quantities of booze. And really what is the fun in that?

Thanksgiving arrived and vanished, leaving behind only about 2 pounds of fat and really funny memories. This may be the warping of my memory by the illness but this year was louder by quite a few decibels in my family. It was really nice to see a few members of my extended family that live far away though and my brother brought the most delicious pumpkin pie I have ever eaten in my life from his job. That pie ran a very, very close second to the stuffing which is always the highlight of my thanksgiving meal. I am always beyond thrilled to find that food can one up itself. I'm not entirely sure that the tense/prounoun usage of that phrase is correct but here's to the contemplation of grammar. I nerdly enjoy it with same aplomb that I enjoy adjectives and adverbs and the inventing of them. Again, awkward sentence I don't want to edit.

Much of Friday is foggy. I know I ate a lot more what with leftovers and my sister's birthday dinner. I know I watched a lot of television and I blew my nose a lot of times. I purposely avoided black Friday shopping and murderous crowds of hungry discount seekers because rudeness makes me stabby. After the birthday dinner for Lorraine, we took our little cousin Ashlyn to see the Muppet movie. I was awash in nostalgia and I teared up more than once just because the Muppets make me happy. Or they remind me of being happy. Or I remember what it is like to be happy. Something involving happiness. And it was so wonderful to see so many young children truly enjoying that first Muppet giggle of many. It was a circle of life moment. Go see it with a tiny tot, unfamiliar with the Muppets. You shan't regret it.

Saturday was the piece d'resistance. That is due to the fact that I was feeling eons better and I had plans. I went Mount Olympus NYC to visit Lambden (Nancy and Jon) at their apartment which is filled with good feeling, a huggably fat cat or two, cinnamon raisin French toast, an early afternoon viewing of Birdemic (which left us all with pounding headaches) and general fun. This was all a terrific prelude however to the epic fun I had with Nancy at a screening of Breaking Dawn: Electric Boogaloo (that is the actual title of the film). I knew ahead of time that it was going to be a good experience when, right before boarding the subway, Nancy said "I hate these trains because they are the color of sadness and bad pornography." 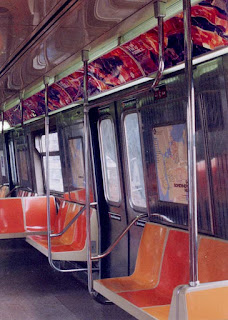 Nancy and I have a long running love to hate affair with the Twilight series. The reason for this is that those books are godawful which would be fine on their own but when you couple that with a rabid fan base, the mockery it inspires in us reaches a fever pitch. Nancy is my humor soul mate in many, many ways and the opportunity to experience something like the Twilight series made film, complete with vampire pregnancies (seriously? wtf?) and a severely unattractive vampire love interest is a gift of manna. I will spare the blog the blow by blow of this film as I'm reasonably sure the Riff Trax guys can and will do something superb when this series is over but suffice to say that I had an awesome time watching this film. Go see it with a grown adult who is silly and understands the kind of love that only a bad movie can inspire. You shan't regret it.

Saturday night after a lovely dinner we all headed down to the East Village for Lorraine's birthday celebration. On the way there Lamden, Lorraine and I shared a taxi that was freshly arrived from depths of fear. By that I mean it was the most frightening cab ride of my life, complete with slamming brakes, turn indicatorless lane changing, speeding and a driver on his cell phone. More than once I felt the urge to vom. More than once I clung to Lorraine and Nancy with the kind of intense purpose that I haven't used since I was 5 and clinging to the doctor's office chair to avoid getting a booster shot.
As for the party, it was everything a birthday party should be: drunken, intimate friends and family surrounding you, loud laughter and music. And dark and stormies by the vatful. Happy birthday my sister! I arrived back at chez Lorraine and Andrew with Kristen and James and I was introduced to my new favorite bagel concoction: salt bagel with cucumber and dill cream cheese. I was born to taste it.

Sunday was a day to start late and aside from getting back to wrong island nothing much else was done. I tried to mentally prepare myself for the week ahead but since it is now Wednesday and I still don't feel prepared, I think I did a bad job.