Fridays are my early days. I have the fortune of working for a library (one of my jobs) that observes all the Jewish traditions and  holidays and closes early every Friday afternoon. Honestly I can only guess that this is the reason I've been able to work two jobs for going on four (I kind of feel like screaming after admitting that) years. Needless to say, I LIVE for Friday afternoons. They afford me the privelege of getting home before darkness, of pretending like I have stuff to do that doesn't involve work, of diverting from my routine. Strangely, I feel rebellious on early Friday afternoons, when I'm at the mall shopping or I'm at my apartment napping or I'm at the movies. These are tiny rebellions. Like hitting the snooze button twice. Or parking outside the marked stalls in an empty parking lot.

So yesterday I opted for the movies. I used to go to films alone all the time when I lived in the city. I suspect I did it so often and with such ease because the sheer volume of people in NYC is enough to make it easy. You get to and from places constantly surrounded by hundreds of other people. I used to eat out alone quite a bit too and never really shook the feeling that I just attended a huge dinner party. (I'm often the quiet one at dinner parties anyway.) Out here, living in the sprawl (and there's no end sight), people notice. You go to a restaurant with couples and families surrounding you and people don't blend you in to the background of their subconscious, a smudge on a Monet postcard from the museum gift shop. No, they think "why on earth is that person here alone? I feel so bad." I know they do this because I do it. I don't know why but the contrast of aloneness and togetherness is so much more stark here, in the sprawl. I say this not because it bothers me (I'm content being alone most of the time) but just because it is true.

The film I saw yesterday was Like Crazy, which is a love story with two attractive leads (make that four attractive main characters), a weepy soundtrack, all kinds of critical acclaim and tons of buzz surrounding it. I knew a Friday afternoon would be sparse what with people having jobs and lives and things to do during the weekend. But for some odd reason I thought this film would be semi-popular. However, there was not another soul in the theater. Not one other person. I experienced the same two part reaction I experience without fail when I first enter a movie theater that is empty.
Part 1: elation at being given a special screening just for me
Part 2: confusion as to whether I'm in the wrong place and/or there has been a zombie apocalypse and I
am trapped forever alone with only a bag of popcorn and my water bottle.
You would think I was joking about part 2 but no, no I'm not. Anyway, I had the theater to myself. 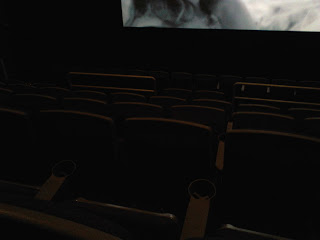 I went into this film knowing I was going to cry. It was kind of like the time I went to see Brokeback Mountain alone in the middle of the afternoon; I knew what I was signing up for and I willingly did it. Like Crazy is a beautiful film that will remind every single person who sees it of their first love. That is a guarantee. I don't care if your first love was so long ago that you can't remember his or her face or you just broke up with someone yesterday (caveat: don't see this film if you just broke up with someone yesterday.) You will more than likely shed a silent tear of nostalgia and regret or, if you aren't weepy like I am, you'll sigh heavily, remembering. There is a genuine quality to the film that I can only assume is because the dialogue was entirely improvised. That, and it is based on a true story. The two young college students (who, incidentally bond over Paul Simon's Graceland an album likely released the year they were born) were so vulnerable and naive and brave and worked so hard for their love. They reminded me of two newborn chicks. Of love. Two newborn chicks of love.

They also reminded me of how lazy I am or how lazy I've become about love. I just don't even want to bother with the pursuit of it﻿. The other day for some giggles I looked at some online dating sites. My reaction could be accurately described as severe laziness. I actually took a nap right afterward! Seeing the two characters in Like Crazy in all their tortured baby chickhood just reaffirmed my desire to have love dropped squarely in my lap out of nowhere, to have to do little else but acknowledge it and then have to do nothing whatsoever to preserve and maintain it. Is that too much to ask?

Regardless, I'd recommend the movie. Tonight I'm going to a tree trimming party in Manhattan. My good friend Lauren throws these every year and every year they are a rollicking good time. So good in fact, that I don't remember a large chunk of last year's party. I was told that there would be candy cane cosmos served this evening. Nothing I say after that will be as good as that prospect.
Posted by Allison E at 11:07 AM