C) ..is for Chuckle. Something I've noticed in the past three weeks, living with a cough that won't die, is that when someone is talking to you and they start to cough after you say something you will start to laugh because you will, at first, mistake their mini eruption for a chuckle. This is regardless of what you've just said. For example you could be talking about how your grandma has been forgetting things and if the person you are talking to jerks forward just a wee bit, you start to laugh. I don't know why I made this observation but if you ever want to see someone laugh, just start to cough after they say something. I mean it could make for a somewhat awkward aftermath what with concerns for your health and fear of contagion. But for a chuckle? Worth it.

O)...is for Old Timey Illness. Having a cough is not the worst malady on the infinite list of "things that can malfunction in/on your body" but the steady stream of irritation doubles as a subtle reminder of your mortality. I may be alone in this but each time I erupted in a coughing fit I kept thinking of old timey diseases. These included but were not limited to: dropsy, pleurisy, consumption, bad blood and Bronze John. Turns out I had none of the above but rather bronchitis, the gold standard of coughing fits.

U)...is for Untreatment. In general I try to avoid antibiotics. Don't get me wrong, antibiotics are 2nd on my list of mankind's greatest inventions. It is just that my armchair general practice degree (aka--the Internet) has given me "ideas" about taking them willy nilly. When I want them to work, I want them to work. I can usually handle a snotty nose and a scratchy throat for the average duration. I just now realized the irony of my practice of being super careful about antibiotics but drinking alcohol on a regular basis does nothing for the hackles of my health consciousness. Anyway, after three weeks I finally gave in and visited the wood paneled office of my family doctor. In a shocking turn of events, he prescribed antibiotics and sent me on my way. I'm on day 2 of the treatment and I just coughed as I typed this. Nevermind that, I have faith in the thing I avoid. That's a blanket statement.

G)...is for Getting Hammered. On Saturday I attended a wine party. This differs from a normal party where wine is served. Think Tupperware party but for wine. Although I've never attended a Tupperware party (as an adult--I have a vague memory of accompanying my mother to one as child.) I can't imagine that the attendees get as hammered as we got at the wine party. Perhaps that is oversimplifying things a bit as we also ate pretty amazing food and learned about the wine we were drinking. In fact the more I think about it, the party was a kind of perfect dichotomy of classy adulthood and drunken revelry. To wit: we learned about pinot noir and after that we drew on the host's face with a marker after he passed out on the couch. This part of the acronym has nothing to do with coughing apart from the fact that thanks to all the wine, I forgot about my cough.

H)...is for Hangover. Let's be honest. Hangovers are terrible, made all the more so because one arrives in such a state due to one's own inability to be disciplined. I can't really accurately describe having a phlegmy cough while hungover except to say that the following words plowed aggressively through my brain like a cable news ticker: retch, spew, shame, nauseate, throb and oh let's just say dropsy. 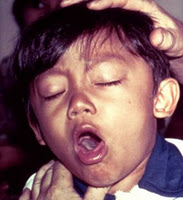