Whenever a professional conference looms in my future as a certainty, generally three or four months ahead of time, depending on where the conference is it always feels either a bit like waiting for the Oscar nominees to be announced or waiting for the name of who is next to be cut from a dance competition. Certainly there is an element of utter predictability at these things: copious amounts of free pens, for example, or uncomfortable sales pitches by vendors you likely have neither money nor power to patronize, or a seemingly endless array of open bars in various hotel conference rooms, necessitating awkward mornings after. But still, new city, new people and a break from the air conditioned nightmare...yes, please. After being given the okay and a few days spent calculating the endless permutations of air travel and hotel booking, I was off to Seattle for five days.

Generally I am alone on flights for these work trips. I am usually very comfortable doing things alone but nowhere do I feel more comfortable being solo than in an airport. There is so much people watching to do, so many glossy magazines to buy, so many packets of mixed nuts to get "for the plane ride" that you'll actually consume before boarding. This time, however, my coworker Mike was on the same flight. There was only one other instance where I have seen Mike outside the confines of work, when we randomly ran into one another at the movies. I got the same sensation that time as I did seeing him at the airport which was really just my brain's way of adjusting to seeing someone outside of the element where I have them firmly placed. That strangeness quickly went away since Mike's a cool guy and in the pantheon of coworkers I could have ended up travelling alongside, I'm glad it was him. It was also nice to have company while I performed my preflight ritual of buzzing my brain to assuage the existential panic I usually feel while taking off and landing.

There was little to nothing notable about my flight other than I could not sleep and my row mates were getting a buzz going. I'm always surprised when people buy both food and alcohol on the flight, considering all of it is overpriced and crappy. But I suppose for a 6.5 hour flight, people think it is worth it.
And after we landed at around 9pm Seattle time (12am NY time) and were ravenously hungry, I found myself thinking back with longing to that overpriced cheese plate I could have had for the low low price of $11. I'm glad we decided to take a taxi to downtown because our driver was pretty hilarious. In one long breath he told us about how liberal Seattle is, how weed is about to be legalized, how one specific neighborhood was where "everything" was (when asked to clarify he said "gays, lesbians, dykes...everything"), and how the bum sitting on a particular street corner was working for the NSA. That last point was the diving board for a rant about how the government is watching everything you do. I liked him. He was also the first person in the city to point out the Space Needle. I always remember the person who plays the human compass for me in a new city. So thanks, hippie taxi driver.

A few observations about Seattle and what I did there: 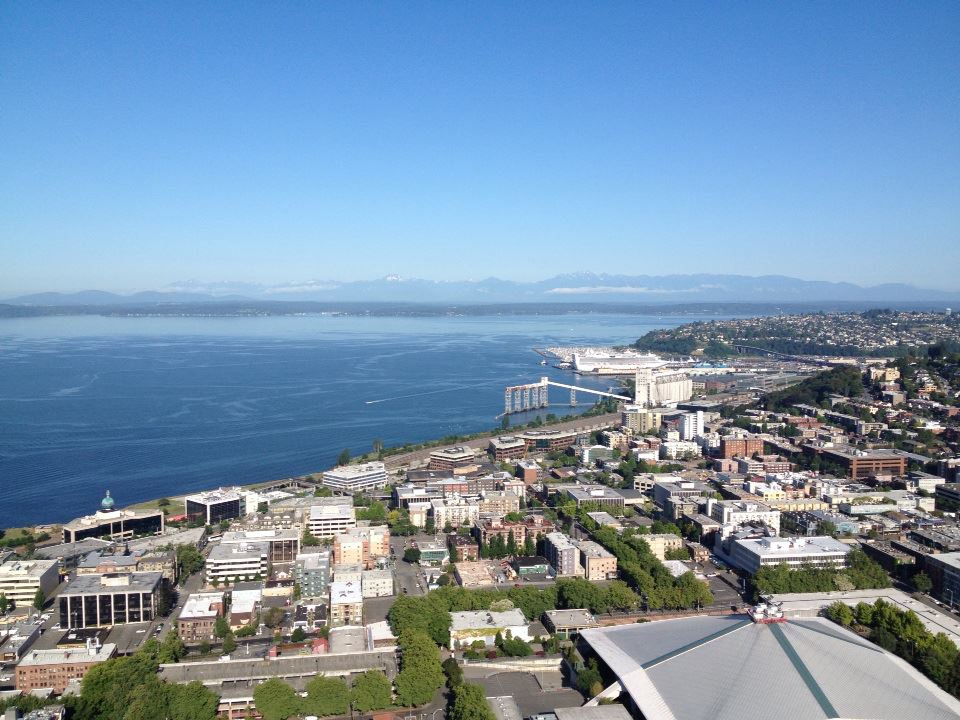 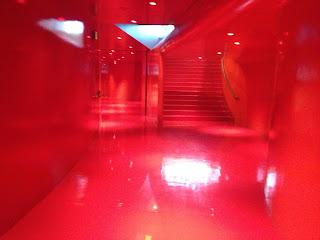 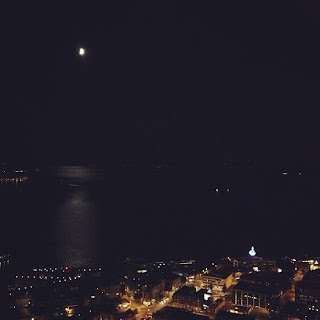 The air was so pure and calm that it made me wish I hadn't spent the evening pickling my liver. Still, I'm so grateful I got to see that view change so dramatically from day to night. It was worth it.
I left the next morning and got on a flight with another coworker and we spent the better part of a seven hour trip home, getting to know each other. It is bizarre to find out how much you have in common with people you work with when you talk to them outside of windowless rooms. Before I knew it, I was back home, back to life, back to wishing I was still away. O the humanity.

Seattle is a beautiful city with beautiful people (no matter what that tourist shop lady says). I wish I had gotten to try more seafood and less beer. Who the hell am I kidding? I loved it all. I met a lot of people who were road tripping the Pacific Northwest and it feels like a trip that beckons. I really just think we should all get a van together and go.