July came and went in a throbbing, hot, humid, wet mess. Strangely enough, that opening phrase also accurately describes my most recent, hovering over, non-romantic romance. But I can't begin by digressing so I'll carry on.

At the beginning of May, I halfassedly concocted a "to do" list for this summer. Following my usual fashion, I'm halfassedly getting through it. July saw me at the beach, jumping Atlantic ocean waves, frolicking, kind of like this:

I successfully completed my first visit to Fire Island and now can say I am a full fledged Long Island dweller, even though after being back here for 5 years, I still feel a bit like Robinson Crusoe, all shipwrecked, looking that footprint in the sand. Other than that, I have completed nothing on that original list. Not even the dang hot dog. But I had like two veggie dogs so, I think I'll just call that one a draw. In fairness, I have neither time nor desire anymore to see Shakespeare in the Park. I did go to the Space Needle though. And I've had a lot of summer cocktails; mint julep is just not one of them. I suppose I was making up for not having one of thsoe yet with the sheer quantity of all the other concoctions I have been drinking. It was a rather pickled July, if I'm being honest.

I went to Seattle and blogged at length about it. I also got so many visitors this month to my little apartment. It portends me returning the visits by traveling this autumn. Lucky me since I can't think of one place where travel in autumn is unpleasant. I did a whole mess of yoga (even if you can't tell) and am so very close to doing this. I can feel it: 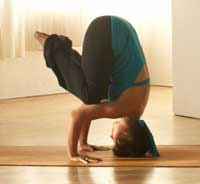 Also, I have a lovely, lovely yoga teacher who said the best thing to me the other day. She said, "You have a wonderful energy around you. It is just so nice to be around you." I have so long wanted to be nice to be around and hearing that is exactly what I needed at that exact time.

Here's the movie list, paltry though it may be, for July:

I keep watching Christophe Honore films for the Louis Garrel action. I keep liking a lot of them. Yet at the same time, I can see how someone would loathe them. In particular, "Love Songs" which I found to be charming, if also incredibly depressing, I could create a list of all of my friends who would feel a no holds barred hatred for it. I was also a big fan of Dans Paris but I pretty much actively hated Apres Lui. So he's just one of those filmmakers that splits my brain down the middle. Out of this month's list, I think my favorite was a tie between Before Midnight and Frances Ha. Two newbies but so worth seeing.

This hasn't been the best of monthly wrap ups but there you have it. My birthday is in about five days and I've planned a Weekend (notice the capital W). I'm certain I'll something to report by the time August comes to a close. If I don't, can we still see each other sometimes?
Posted by Allison E at 7:08 PM