This Entry took me a week to write, or, Barcelona day one

This entry's beginning keeps changing because I keep coming back to end it and I keep failing at that. This might be the worst opening of all but I'm keeping it because it will apply universally to any changes I might make. For example, I just changed it again.

Before the temporary dream world of walking around aimlessly, 5,000 miles from home has dissolved into intangible memory (apart from the flavor of those salted, roasted padron peppers which will always live inside me), I am basically filling up all of my time with wine and cheese and tapas and laughing and seeing some of the most beautiful things and people I ever have seen. Helpful travel hint: when possible, always travel with easy going, flexible conversationalists. You will always walk away with good feelings. As someone who spends her life in a hamster wheel, searching for new and inventive ways of generating good feelings, I feel qualified to dole out advice. Also, have you met my friends and family members?

I typed part of this in view of the Sagrada Familia, the unfinished (after over a century) masterpiece of Barcelona's favorite son, Antoni Gaudi. After knowing Gaudi by name only and in a periphery sort of way, I was not prepared for the awe inspiring footprints he has left behind all over Barcelona. I quickly realized that there is no way that Gaudi or anything he created during his prolific career could ever be appreciated on the periphery as it seems like every other building is by him or inspired by him. His architecture is a sensory experience. We were temporarily housed in the shadow of this headless wonder that, even in its perpetually incomplete state stands as the center of a city brimming over with man made wonders of architecture and design. That a half finished masterpiece is the jewel of the city should tell you something about its sheer originality. It actually felt like a privilege to have it in sight for the whole week. I can only guess that the citizens of Barcelona feel that way about it all the time. It might be worth another trip over here when it finally gets completed, though it is entirely possible that it won't happen in my lifetime.

The truly unique part about this work is that it felt both entirely classical, gothic even and entirely modern at the same time. It felt like an exercise in dichotomies to me. 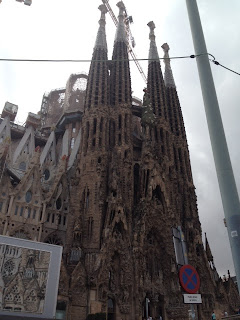 From a distance its size was remarkable but the true awe hits you when you approach it closely.

One last thing I noticed was how bizarre it was to exit the Metro every night in its shadow. It furthered that feeling of dichotomy: art and life. Everyday people carry on their lives, doing all of their busy nothings in the shadow of an unfinished work of genius. Obviously very few people have anything to do with that but some celestial observer would likely think "Um, can you stop playing with yourselves and finish that damn church?"

That was the first tourist attraction we visited. Afterwards on that day, groping around for some genuine Spanish experience, we ended up at the most touristy eatery in the entire city. Though my group made a pact with each other to move on from that horror, I decided to mention here that if you ever find yourself in Barcelona or any city for that matter as a tourist and you feel peckish near a major tourist attraction, walk further than a mile from where it is, if at all possible. Otherwise you run the risk of being served something that is really the tasteless, burnt version of the thing it was supposed to be. Also, never eat paella from a place called Gaudi gelateria. Just don't do it.

This post took me a week to write and I have literally only described our first day away and I haven't even described all the things I want to remember for my own personal interest. Life never overwhelms me as much as it does when I'm traveling. Not overwhelming in a negative way but in that way that you just want it to go on and on and on wondering at everything beautiful in front of you and longing to find out what happens next. Stay tuned.