Despite downing about a gallon of water before falling asleep the night/morning before when we got back to the apartment from Gracia, I woke up feeling that dried up raisiny feeling that walks hand in hand with alcohol consumption. My mistake was not sticking to the wine. I'm pretty sure I was just drinking bowls of vodka, but I can neither confirm nor deny that.

The plan for the day was to at some point visit the Picasso museum. It was our last day in Barcelona and our group was going to go our separate ways after that so the Picasso museum was to be our meeting point. After taking a pretty long time to get out of the apartment, Jason and I started walking up the steepest hill in Barcelona in order to get to Park Guell where we were to meet up with Nancy and Jon.  I think we probably made it about 10 minutes and a quick ATM stop before deciding to get into a cab for the rest of the way. I felt a little guilty about spending money on a taxi but sometimes, you have to live like a local and I know, without any doubt, that if I was a Barcelona local, I would have taken a cab.Yeah, that's why I did it.

Park Guell is just one more of Gaudi's footprints, complete with amazing architecture throughout and about four hundred million stairs. Here are some photographs, including one of me tripping after rounding a blind corner which was "accidentally" captured by Jason. 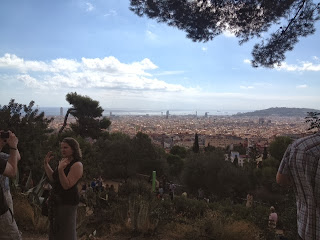 We parted ways after traipsing around the park. Jason and I were going to try to get back into the Casa Battlo gift shop since our previous attempt failed. We made our way back to the site and were met at the entrance by a scowling, tiny woman who looked dubiously at my face as I explained to her that we didn't want to sneak inside, only to visit the gift shop since it had closed early the day we visited. She explained that if I didn't have my ticket stub (I didn't as I had cleaned out my bag that morning in a hungover state of exasperation) that there was no way I could prove that I had paid the entrance fee and she couldn't possibly let us in because we would go tell our little friends that it was really easy to fool this 4 foot "guard" and get into the house for free. We had traveled across town and wanted to see the gifts from our favorite attraction in Barcelona and it seemed ridiculous to me that, after she acknowledged that the gift shop had indeed closed early on the day we were there (how would we have known that if I hadn't been telling the truth?) that she was still being so stalwart. After standing in line for a few minutes to see if we could find a friendlier face behind the ticket booth, I realized that I had paid for my entrance fee with a debit card and was able to pull up my bank statement (have I mentioned yet that my phone bill after this trip was about $200?)  and prove that I did indeed pay for my entrance on the day I told her I did. All of this was going on in Spanish which, while I understand it and can speak it pretty well, I was missing a word here and there and all the while trying to find the grammatically correct way to say "just let us in, biatch." When I showed her on my phone she stood there staring at it, unblinking beneath her power trip. She eventually relented and took my phone with her to show her supervisor and explain to her what I said and we saw her supervisor simply nod her head and shrug her shoulders as though it were no big deal because you know what, little lady guard? It WASN'T one.

We finally made it into the gift shop and, like most events that are preceded by a lot of hopeful anticipation, we realized pretty simultaneously that it wasn't worth the trouble. I think I bought a pen. Huh.

After that, we went into an expensive restaurant where I ordered at random and was served a slice of toasted bread with cheese on it. I think it cost about 9 euros.

We made our way down to Las Ramblas. Or maybe we started walking and ended up randomly at Las Ramblas...the memory fades. I do remember that it was first on Las Ramblas that I heard the earsplitting, nails-on-the-chalkboard shrill pain inducing sound of some novelty toy being sold by street vendors that sounded like a maniacal duck being tickled to death. I didn't know it then but I would hear it throughout the rest of the trip. But each time I did hear it, it made me cringe and scowl and I sincerely hope to never hear it again. Why anyone in their right mind would buy such a thing will live beyond my understanding forever. I know that sounds a little melodramatic but honestly, it was awful.

We wandered aimlessly a bit in order to kill time before meeting at the Picasso museum. Jason is one of my favorite people to ramble with for many reasons, mainly because if we are not laughing we are bouncing ideas and observations between us. Some people either hate going on meandering walks or do it very badly, i.e. they get frustrated and cranky and can only talk about those two feelings and/or sigh heavily. They would be bad ramblers. I don't really get along too well with bad ramblers. I try to surround myself with people open enough to walk and talk with me for an indefinite amount of time. If I were to assign a name to my posse, it would be the ramblers.

Somehow, we ended up at the Picasso museum and I could not tell you how this was achieved since it is on a side street of cobblestone. I think I've said before in this blog that I have no idea how to get from point A to point B in Barcelona. So don't ask me for directions in that city. Everyone showed up, Lorraine and Rashish sunkissed from a day at the beach, Nancy and Jon energized from walking around the city looking at beautiful gothic architecture.

My impressions of the Picasso museum were...dampened. I don't know why. Anytime one is able to see Picasso in any capacity is a good time. I think maybe I expected it to be a bigger space. There was also a very large portion dedicated to his painting "Las Meninas" which was something he was apparently obsessed with since there are details and sketches and first drafts enough to fill several rooms of the museum. I could appreciate the effort, the time, the obsession that went into the work but as for the painting itself, I suppose it didn't grab me as other of his works did and would when I got to Madrid. I realize this sounds jaded. But these were my impressions. Maybe it was the size of the museum, or maybe it was the two American young women taking photos of themselves in the museum saying things like "OMG sooo CYUTE everything in this place is sooo CYUTE!" Whaddayagonnado?

After leaving the museum, we parted ways with Nancy and Jon and went back to our flat to try to cook whatever food was left since we wouldn't have time to eat it in the morning. Rashish was headed home to NY and Lorraine, Jason and I were off to Sevilla in the morning. Rashish and Lorraine had bought bicycle shaped pasta earlier in the week (I'm still unclear as to who decided that since I know Lorraine to be easily swayed by packaging) so they cooked these delicious bicycles for us to enjoy on our beautiful porch, overlooking the Sagrada Familia in the dark. If memory serves, we also had to eat three pounds of olives and mini gherkin pickles and finish two or three beers and about two bottles of wine, a tall order for one meal. We gave it the old college try. Nancy and Jon stopped by to say goodbye and left for Azores the next day. On reflection, I'm reasonably certain I spent my entire time in Spain in a light to heavy buzz of wine and food so my recollection, fuzzy as it may be, was that we tucked in early, lulled to sleep by our erstwhile week long home. And by "lulled to sleep" I mean the mystery sound (I don't know if I mentioned this before in the blogs) we kept hearing somewhere in the distance of our apartment which sounded suspiciously like a pterodactyl searching for prey, ended the evening with a loud punctuation. A stone age "Adios!" if you will.