I just spent this afternoon and early evening moving my CDs from the stands I've kept them in for about 10 years, to a compact little square that can be carried around like a suitcase. I took the opportunity to weed through the ones I never listen to, never have listened to or simply feel flabbergasted that I ever owned. I'm certain I don't have to explain my attachment to these discs; I've carried them with me over decades of my life, from one living situation to another. They have, for the past four years assumed their place inside two column like racks on the side of my fridge and it has become high time to make space and lighten the load of my life. So I made the executive decision at 2am the other morning to buy a case on ebay in which to house (and likely bury) my CD collection, such as it is. The entire endeavor only took a few hours but it took me back years.
Some observations: 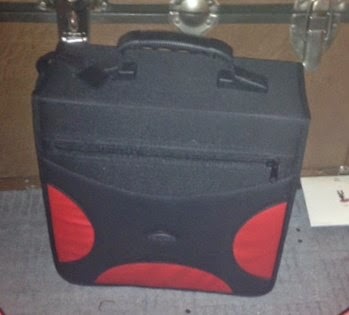 Naturally the more organized and/or space worshiping of you will question my desire to hang on to these little silver discs at all. I tend to agree with that notion but I simply can't let them go. Not yet. Getting rid of the cases was one thing. And, true, I have most of these uploaded. But I'm an old ass lady who enjoys the tangible feel of a CD, of lying on my stomach on my bedroom floor, reading liner notes and lyrics and singing along. Really, I feel like you should just let me be.

Quick question though: what in the sam hell do I do with these jewel cases??
Posted by Allison E at 10:03 PM