Bernadette Peters in "The Jerk"

For absolutely no other reason than the closing of my job today due to inclement weather, I have whittled away the afternoon watching DVDs. I just finished watching the 1979 classic "The Jerk" and  while I have always and will always have the hot 'n' tots for Steve Martin in a big way (something about a hilariously funny, smart musician, writer, painter and art collector does it to me every time) I find myself with a crush on Bernadette Peters and her outfits. From the heart shaped sunglasses:

The 1940s-ish first date at the carnival outfit: The randomly placed be-jewel on her fancy dinner dress as she avoids looking at the snails on her plate (and that HAIR):

Her jaunty travel cap when she brings Navin's family to his homeless spot on the stairs:

And of course her sailor's cap and jacket during the cutest recorded duet in film history:

The film was made in 1979 and apart from the iconic disco scene, it looks like it belongs in 1940. Or maybe that's just Bernadette Peters and her kewpie doll looks.

Actually there is one indication that this was filmed in the late 70s. 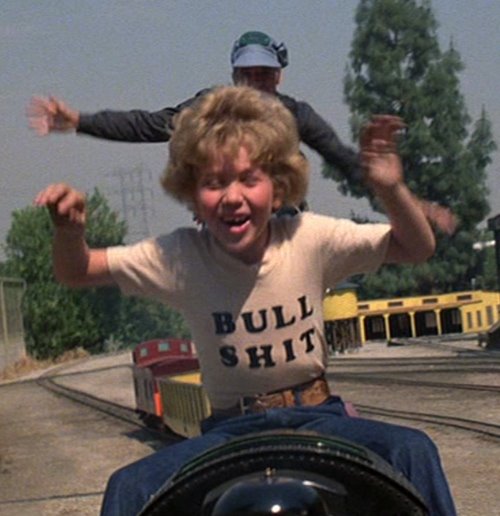 I wonder what ever became of that carnival train hijacking child....