I've been reading The Folded Clock by Heidi Julavits which is a diary she kept over a year or so and I'm really enjoying/hating/hatenjoying it. Diaries, including the one you are right this very second reading are usually interesting but sometimes they are bland and/or infuriating. Reading someone work something out in their head or peeping at her life through her own words satisfies the voyeur in me but rankles the advice giver in me. I like diaries and personal blogs in that they are the ultimate form of passive people watching but the starkness and insight they provide seem rife for comment. And then there are the invisible filters. Honestly, while I've been reading Julavits' diary, I'm wondering how much of herself she edits and then I get annoyed that I can't read what she's edited.

At any rate, I'm going to follow her lead and try it a few times, starting today. In her version of her daily diary, she begins each entry with "Today I..." and I will do what I feel I normally do which is change something I've read and admired slightly but distinctively enough to make it my own. So I'm going to begin my entries with "Yesterday I..." Uniqueness for days.

Yesterday I woke up in the basement of my mom's house. Half my life lately is spent there on Long Island there and the other half in my sister's spare bedroom in Queens. I've been making a conscious effort to be on Long Island more often since my grandmother's funeral, primarily because I feel the need to be tethered to my mother, on the off chance that she needs me for something practical like filling out paperwork or to accompany her for shopping. At least I tell myself that outwardly. I'm beginning to understand that being there helped my own peace of mind more than anything.

My stepdad, grandfather, mother and I ate waffles pretty early in the morning as they had to go to an early Mass. I don't go to church and my plan was to be on the road back to Queens while they were gone. I rarely get to eat breakfast with anyone and it just so happens to be one of my favorite things to do and it is one of the best parts about being at my mom's on a Sunday morning. After breakfast, my mom asked for help (see, good thing I was there) in setting up a snack tray for the guests that were coming over directly after Mass; she and my grandfather are praying the nine day Novena for my grandmother and volunteers from the church come by to lead them in the special prayers. The day before, I had walked in on them inadvertently and it felt like catching someone in an intimate conversation. They were gathered around the dining room table reciting prayers over a picture of my grandmother. The volunteers had brought their daughters who were sitting quietly on the couch and it felt like a family gathering in my family house, comprised mostly of people I didn't recognize. That's a strange, strange feeling.

Anyway, I set up a mountain of cookies, bid everyone goodbye and was on my way back to Queens. I got there in record time, made strides in my perpetual quest of finding a parking spot on the right side and spent the afternoon chatting with my sister as she got ready to spend the next few days at a swanky hotel in midtown for a work conference. She invited me to visit later that night and I called up my friend to join us for a few cheap drinks in a very expensive hotel room. The past few weeks have been harrowing; a quiet chat over wine sounded exactly what I wanted to do. I had a few hours to kill in the interim so I did what I've been known to do: I fell in and out of sleep for a few hours while watching television.

When it was time to go, I got on the bus and rode through Queens with my earbuds providing a soundtrack to the Sunday evening strolls I could see everywhere. Sam Cooke narrates Sunday. I thought about being in my 20s and taking the bus from the West Village all the way up to Washington Heights and I longed for that time again. I've noticed I spend most of my city time longing for another time to happen again. That statement could also apply to back then. Nostalgia is a snake head eating the head on the opposite side for me. I palindrome I.

I found the hotel after skirting tourists and unwittingly holding my breath against the hoards of horse and carriages that line Central Park. At the hotel entrance, doorman actually pushed the revolving door for me which took me by surprise and instantly triggered the "I don't belong here" vibrations at the base of my brain. Those got more intense as I took in the shiny marble floors and was called "Miss" by every smiling staff member that passed. Here's a dramatic recreation of events:

My friend was waiting in the lobby and we found my sister for her room key and headed upstairs to the nicest, albeit most sparsely decorated, hotel room I have ever been in. It was roughly the size of an apartment, and contained a bathroom the size of my old studio apartment. The view gave me the feeling of being nestled quietly among the surrounding skyscrapers and being in midtown Manhattan and hearing nothing from the street was a bit surreal. There were two mirrors facing each other in the "changing room" and I snapped the photo below, during which I wondered what it would be like to truly be able to afford to stay in such a place on my own dime. I imagine it would feel like looking at the world and seeing your own reflection repeated forever through it; money and all the power it affords must make someone feel infinite. 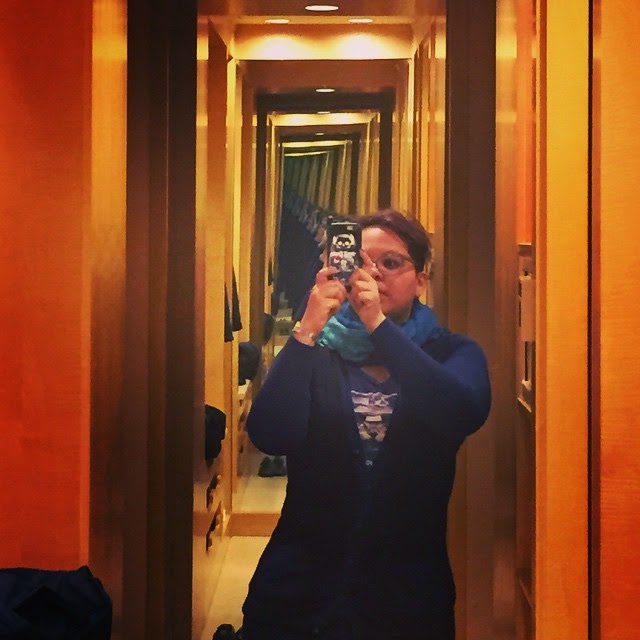 We needed ice and after a brief stroll around the floor yielded none, I called the operator who said that ice is delivered to the room. So then ice was delivered to the room. I realize at this point in my entry I must sound like a country bumpkin. The reason is because in terms of fancy hotels in the most expensive city in the country, I am one. The man who brought the ice then proceeded, about an hour later to bring another bucket to "refresh" the first one. I had a lovely chat over lovely wine in a lovely room. However, the main thing I gleaned from my few hours visit there was that I was far away from my wheelhouse; I could never be able to relax amid all that comfort.

I made my way back home like a proper plebe and got back just in time to watch Mad Men, something around which my life revolves for the next five Sundays. I'd talk about it now but I don't have world enough or time. It did occur to me that I had just come from right smack in the middle of where the world of Mad Men took place 60 years ago and found myself once again longing for something to happen again that had already happened and that was probably wasn't as good as I thought or imagined. I'm going to jump the gun and assume that the following seven days worth of entries will follow this theme to the letter. Just a hunch.