Amsterdam Part 2 but part 5 of the trip, or How I learned to drag things out and I should end this series soon

Some of what happened next during our trip is a bit hazy. I am going to be honest and say that is because it has been about six weeks now and I have been doing a LOT in the interim so if this part seems disjointed, that is why. And normally I am so very, very organized in my thoughts and the communication of them so this is a very strict departure from the detailed and very important recounting of my vacation in this blog, something that is the 2015 version of inviting you into my sunken living room to look at slides on the Carousel projector while we eat cheese fondue. But, you know, without all the cheese and swinger vibes of that scenario.

Here is a photo of the apartment where we spent the rest of our time in Amsterdam: It was a one bedroom on the 2nd floor of that building up the most narrow stairs on the planet.

It really isn't a trip to Europe for me if at some point I am not forced to haul my luggage up a set of narrow ass stairs. It was worth it this time because the apartment was perfect in size, location and really great (and needed) water pressure in the shower and a washing machine. Someday we apartment dwelling Americans will pick up what Europe puts down and having a 2-in-1 washer/dryer the size of a small dishwasher will become de riegueur. But I digress. We dropped off our things and headed straight out to grab some lunch and explore the neighborhood a bit. It was the middle of a weekday afternoon so instead of what I'm assuming is the average 400 million bicycles on the streets of Amsterdam there were only 300 million. We found a cafe that hardcore reminded me, on a smaller scale, of the cafe in that unforgettable scene from "Oslo, August 31" which I'm including here because I just want to watch it again. My blog, my rules.

Watch it with subtitles, please.

There was a bit less going on in the real version but the people were just as pretty. We had a leisurely brunch and had quite a few hours to kill before taking a boat ride down the canals after sunset which would be at 10pm. The plan was to head to the Anne Frank house but when we got there, it was pissing rain and really cold and since we knew we'd have a chance to go the next day, we decided to forego the 2 hour line and instead check out the surrounding neighborhood. We walked down Rosengracht with all its shops and cafes and coffee shops (there is a difference here). Amsterdam, and that neighborhood in particular, reminded me so much of a large city version of where I went to college. The same laid back and simultaneously introverted vibe of the locals was very New England small town to me but the pace of the roadways and the frenetic energy of the transportation alone was very New York City. Lauren said she didn't appreciate it that much since it reminded her too much of NYC and she was looking for escape. I felt right at home there in that improbable convergence of two very familiar sensibilities. I spent that first afternoon thinking Amsterdam is an ideal city and I still do.

Ideal, yes and cold. It was late June but I was badly in need of socks because it was cold and wet. I had a serendipitous experience when I turned to Lauren and said "I need to buy socks right now because my feet are freezing" and she, quite literally pointed to a building behind me that had a plethora of socks in the window. It was a vintage clothing store with an entire back room full of socks. Ask and the city of Amsterdam provides. I went in and spent too much money on a pair of hounds tooth patterned socks which I fell in love with and will wear forever and ever.

After a few hours of wandering in and out of rain that was falling and stopping again we decided to have a small snack and ended up at a cocktail bar that served really good, if incongruous with the sleek lounge atmosphere, Chinese food. Unbelievably, we still had a couple of hours to kill before the boat tour so we decided to get a drink and ended up at Brasserie Blazer. We had a few pints and enjoyed the bartender's killer Spotify playlist. About an hour later it was time to head to the ferry for the canal boat tour.

We had spent the trip thus far forgetting to eat and functioning on empty stomachs so we decided to stop quickly for some frites because, and if there is any lesson to be learned from my relating my vacation stories to you this would be it, if you are going to shove your face on vacation, it may as well be with fries.

Seeing the city at night from the canal was a unique and beautiful experience and one I will never forget. The pictures I took were not the best but here they are anyway: 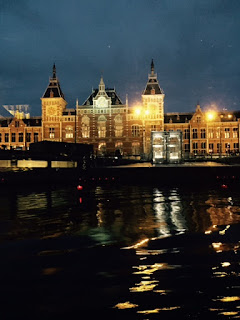 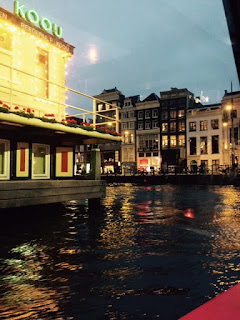 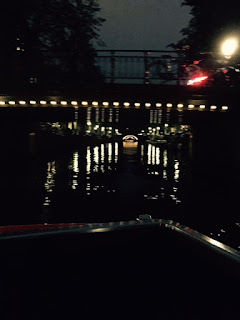 The accompanying audio tour was a bit cheesy but amusing and did have some informational tidbits I appreciated.

It was after eleven by the time the tour ended so we decided to stroll through the red light district to check out what was happening. And when I say "stroll" I mean that very loosely since one can't really stroll down streets packed like sardines. It was pretty quickly apparent that every night is the same in that area so we had a drink and headed back to the apartment to prepare for the next day of day drinking and brownie eating. I mean, of museum hopping and culture.

I swear there are only two more days to get through. Hold my hand and we'll make it through the next installment which features two museums, a hallucination I had and the best Thai food I've ever, ever eaten. I know, whatta cliffhanger.
Posted by Allison E at 1:30 PM