Writing these blogs about my trip has made me a little bored within my current pinball machine of part time jobs. I feel sometimes like I just zip around crashing into things under the flashing lights and noisy near accidents of everyday life. And sometimes I long for the din to quiet for a handful of hours and to close my eyes and open them and be in a new country. Sigh.

Amsterdam greeted us on our third day with overcast skies and just millions of bikes, all narrowly skirting collision. It was another chilly day but if I'm being honest, I prefer chilly to hot and sweaty any day, particularly when you are standing in line for hours, which is exactly what we did in order to get into the Anne Frank House. The weather was actually very strange that day because it shifted so dramatically from overcast to sunny to rain to warm...Amsterdam in June is bipolar.

I did not get any photographs in or around the museum but I will say that it is a place everyone should visit at least once, even if you've never read the Diary of a Young Girl, even if you only know peripheral information about Anne Frank and her experience. Being in that space, reading about her life and her family and roommates was striking and poignant and more than once I found myself overcome with emotion. There was a palpable feeling in the museum among all the visitors which I'm certain happens each day the museum is open, which is apparently nearly every day of the year. I was told that the wait to get inside is almost invariably hours long and after going inside and spending time among the rooms where Anne lived and wrote and seeing and experiencing what it must have felt like to be trapped in a small space for years, I have to say that waiting that long is the easiest and most worthwhile way to spend time. I will never forget that experience.

After we got done there, we were both ravenous and decided to try The Pancake Bakery which was just up the road from the museum. I had a very delicious savory pancake with lots of little salty bits in it that I'd like to have a again right now as I type this, and an Orval, of course.

We had booked an all day excursion for the next day so this was the day to see the Van Gogh museum as well since we were leaving the day after next. The sun had come out and the weather had been growing hotter so our journey from the restaurant to the Museumplein was a bit slow going.

Our visit coincided with the 100th anniversary of the children's character, Miffy and all along the Museumplein were commissioned versions of her which I thought were all pretty cool. Here's me standing next to (and looking blobby beside) the Delft inspired one, with the line of others behind me. 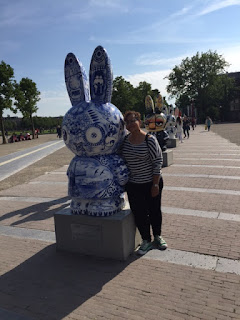 We made it to the Van Gogh Museum about 2 hours before it closed. To be honest, I was a bit tired and worn out from standing in line for Anne Frank, eating a heavy lunch, walking in the heat, etc so I was a little relieved that we were forced to accelerate a bit through this museum. I appreciate the art of Van Gogh in the way that someone who didn't really study art and knows a particular artist more for his pop culture status on the walls of 1990s dorm rooms. I did find that I liked his pastorals way more than I expected, considering my limited impressions of him were mostly biographical and mythological; I didn't expect the down to earth portraits and the muted colors of some of his work.

While walking through the exhibits, I overheard a lot of conversations over the art work that were, how shall I put this, enhanced by what I'm assuming was, how shall I put this...legally obtained marijuana. And I thought that was pretty entertaining and something I had forgotten to notice. Frankly, the streets of NYC smell more like pot than any neighborhood I walked through in Amsterdam. Could be the baked goods angle, though. Not that I'd know anything about, say, enhanced brownies, for example. I just know what a friend told me. Yeah. A friend. That same friend went outside and ate a brownie in the sunlight and then went home to nap and when she opened her groggy eyes the first thing she saw was a summer sky marbled with clouds. The blue in between the clouds looked like faint little veins and for the briefest of moments she had the distinct, warm feeling of being on the inside of a ready to be hatched egg, all tucked in and safe. She had the sincere notion that if she lifted her index finger and lightly tapped, the sky would crack lightly and beyond would be the galaxies that she could lie still and observe from a secure and cozy distance.

I mean I don't know firsthand or anything. I just know what she told me.

Anyway, inside the museum, they have these wooden booths for visitors to sit in, should they become "overcome" by the art work. I have no idea if these are tongue in cheek or if they are actually there for their stated purpose but I do know that Lauren sat in one and I took a photo of it.


After leaving the museum, we stopped to take a photo by the now iconic "I amsterdam" sign. Here's mine and I'm standing just under the first hump of the "M" and being slightly less creative than the people surrounding me who were climbing letters and doing splits. 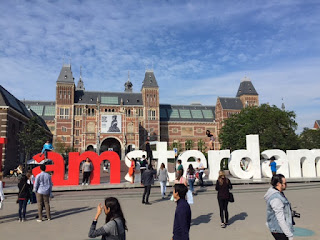 Museuming all day is exhausting and for no other reason on earth, we decided to go home and nap and rest up before checking out a nearby neighborhood. By the time all was said and done, we were hungry again and decided to wing it and walk around De Pijp, only it was getting late and a lot of places were closing up. We happened upon a tucked away Thai restaurant called Siriphon who were literally closing in 30 minutes. We made it just under the wire and holy shit, I am SO GLAD because the food was freaking amazing. I'm actually salivating in the memory. Tofu and noodles and spring rolls and spice and mmmmm. If I ever return to Amsterdam, I'm going to chase all the waffles I eat with all the food here.

We finished up dinner and headed to Barca for a cocktail. It was loungey and very sleek in there and, even though the bartender had some difficulty with Lauren's order of an extra dirty martini, very cool and low key which was the order of the evening. Across the way, there was an Irish bar (isn't there always one, in every city on earth?) called O'Donnells that seemed lively so we stopped in there for a quick drink before heading home. The last day of the trip was to be an all day excursion to see windmills, cheese making, clog factories and sundry and it had to be an early night.

Just one more of these and I can get back to writing about...um....stuff. And junk.