I face the world with whatever courage I can muster. Most days it doesn't even feel like an effort but more of a rote habit, like the way I make my coffee or the pleasantries I exchange with the people around me most of my daily life.  I wrap myself up in a cocoon, in layers of cocoons that I've spent years spinning out of sarcasm and experience and humorous deflection but Jesus, sometimes. Sometimes I'm walking home from the train and the streets are empty and my head is empty and my apartment is empty and it strikes me as ironic how the absence of something has the identical impact of a million somethings. And then, when I get inside and I turn on a light it feels so good to let everything splash to the floor, disperse and trickle slowly in between the myriad cracks in the floor, like an offering to this old man of a building. This room has probably seen actual problems had by actual people over the years. So the eroded shadow of a silly little woman shaped bean is just a small addition to the hill.

So now that that's out of the way, now that I've had my occasional (still can't spell that word on the first try) good, hard cry,  now that I've gotten up and made myself something to eat and poured a glass of wine, now that I've talked myself out of feeling a certain way with all the rationale in my arsenal and now that I'm okay with being alone again, I can work on my book...an epic sarcasm about how I have spent the better part of the last thirteen years of my life. The upside of all THAT is that this shit is writing itself, every single day I'm employed. It is, in fact, the only thing I enjoy about my current job....the potential for it to be part of my book.

So what else happened today?

During my lunch break, I went outside to get something and realized that the closest liquor store, to my job is quite literally called the following: 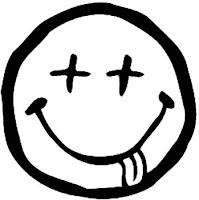 I'm not making that up; that name is on the awning in front of the store. Just Google "Liquor stores on 104th street in Corona" and the image that accompanies the results proves it. I've gone in there a few times and, despite everything, including all of the inventory, being behind bulletproof glass, the owners seem to be savvy and have their shit together. So I have to assume they were dipping into the merchandise when it came time to name their business.

As I passed by this afternoon there was a group of about six men, all wreaking of booze and eating white rice and chicken out of take out containers, laughing loudly about some slurred thing or another. At what point does a group of friends convene of a Friday afternoon, pickled and laughing and eating rice outside the Wine + Liquor= Drunk Face? A question for the ages, really.

I also passed a man today who was unloading a truck of produce into the side entrance of a supermarket. I noticed he was holding a crate of avocados and I suppose my eyes were following the bright green fruits, nestled snugly into place and how they conjured warmer than 25 degree climates when I made Accidental Eye Contact (AEC), one of my lifetime weaknesses. He responded to this by saying, "Chulita adonde vas?" (Cutie, where are you going?) And I wondered how, underneath my heavy down coat and wool hat underneath a fur lined hood and scarf wrapped triple around my neck....I still managed to make AEC and about how, short of wearing a blindfold, I could prevent myself from doing it. I do practice with my cats from time to time, so maybe that'll stick eventually.

Anyway, I don't have much else to add today. Except that I was reading some old writing and I wrote the following about my day in February, 2005 and I like that I wrote it because, like today, I want to be able to read and remember what it was like on an average day, ten or eleven years before.

February 1, 2005
over a rather sickly, sticky, syrupy breakfast the young greek waitress asked if i was an actress and would i consider being an actress and "you just have one of those faces." she was glancing peripherally at the manuscript i was reading, droplets of coffee soaking through the top two pages as i stirred horrible sweetener and noticed my pinky toe sliding through an unseen hole in my sock."no, i'm not an actress." i said, and i wanted to add "but i feel so dramatic all the time. so, maybe i am a little bit of an actress." instead i just chuckled nervously and said i was reading an unpublished novel (the truth) that i was enjoying (a lie). she asked if i knew the author. i said no (the truth) but that i was kind of proofreading it(a lie). i had no real reason to punctuate with lies, small as they were. i just felt...like acting.and i wanted to sit in there all day long. just me, my coffee, the manuscript and the waitress. just bullshitting the day away.then, later, as i trudged my way up the subway stairs i tried to remind myself that someday very, very soon, i'm going to have to stop twiddling my thumbs through day after day.

....also, to remember that apparently nothing really ever changes. Jeez.