I saw The Cure recently at Madison Square Garden and it was easily one of the top 10 shows I've been fortunate enough to attend. It was my third time seeing them, the last time being literally 20 years ago on their 1996 tour. The Cure is what I like to think of as an "old friend band"... no matter how much time passes, or how many new bands or songs or albums come in between us, we just pick right back up where we left off. This most recent show was no exception.

It probably didn't hurt that the concert was at a venue where I spent a decent percentage of my teenage years and my 20s. I still remember when there used to be a bookstore right at the entrance of MSG and the time before there was a "Paramount Theater" on the second level. I have vivid memories of waiting for a Nine Inch Nails show there, decked out in the goth gear I was sporting in those days and browsing books in that store while waiting for my concert buddies. There was an older gentleman in a three piece suit who approached me then and said "I'm not being weird, but I love your look." And he just walked away and it wasn't weird. Unexpected, but not weird.
I always felt like the luckiest person alive when I was on my way to a show. I still do feel like the luckiest person alive when I'm doing that...lucky that my musical heroes are still alive and kicking and doing their thing. When I think of the afterlife, I imagine it as an outdoor concert at dusk on a perfect weather day.

The band was in top form. Robert Smith's voice hasn't changed in 30 years and I had a list of songs I wanted to hear that was 10 deep and he played all but one. The one I didn't hear was "Untitled" from Disintegration but I can't blame the band. That song is long and not the most popular from that stellar album. I love so hard that I have The Cure to make me feel like I felt a long time ago. I'm running out of things that can do that. Whenever I'm alone with you....etc. etc.

Speaking of feeling like a long time ago, it had been a few years since I saw a show at MSG. Some things remain unchanged, others are unrecognizable. I think the last time I was there was to see Arcade Fire in 2010 on my birthday and a lot has changed in six short years. Gone is the bookstore (btw, that's a good way to describe NYC in general these days: gone is the bookstore), though I suspect it left a long ass time ago. It has been replaced by some generic tourist trap called "The Pennsy" which is just a really stupid name. Gone is the film of dirt that used to cover the inside lobby of MSG...it is actually pretty clean and modern looking now. The concessions were always overpriced but they have now reached ridica levels. People still try to scam their way into seats that aren't theirs and it is pretty pathetic when they do and the seats aren't even that good. Like, if you are going to go through the trouble of lying about shit, at least make it worth everyone's while, not some perplexing lie about how you hold tickets for a pair of crappy seats. It makes me sad for you. It reminds me of this one girl I went to high school with who turned out to be a bit of a total liar. She came to school one day and told us how she had seen Stevie B perform the night before and claimed that he signed her underwear yet, when pressed, could not produce said underwear. And it just made me feel so sad for her because again, if you commit to lying, go all out. Mick Jagger signed my underwear or Bruce Springsteen did. Damn at the very least, Stevie B kissed me. Just not some freestyle singer signing your skivvies. That requires tangible proof.  You are going to have to prove you have ticket stubs for the seats you are in. Think your lies through, people. Or you know, just don't lie at all.

I was seated next to a young man who, at first, I assumed was The Cure's biggest superfan. I was wrong however and I strongly suspect he was just high on meth or its more subtle equivalent. We arrived in the middle of the opener's set, a band called the Twilight Sad (best. gothy. band. name. ever.) and they were good. The guy next to me seemed to be fiercely in to them because he was beating the shit out of his thigh in rhythm to every song they played. You really have to love something in order to beat the shit out of yourself to express it. The enthusiasm he was emitting was nothing compared to what was to come. When they finally took the stage, the band played Pictures of You and my seat neighbor fell into a paroxysm. With every new song he screamed "HOLY FUCKING SHIT" or an equivalent exaggerated exclamation. Don't get me wrong, I'm a fervent concert goer and I don't ever stand stock still or just stare at the stage with the impassive observational stare of a scientist, the band my test subject. I go to live shows to feel something and I feel it. But there is a fine line between being moved by the music and being...well, high on something. Homeboy was way over the line. My assertion was vindicated when, about 35 minutes into the three hour set, he was fast asleep in his chair like a post-tantrum toddler.

A couple arrived super late to the show and sat in the row in front of me and proceeded to check their phones every 20 seconds for the following apps: Facebook, Snapchat, Twitter, Their Own Selfie Collection. I definitely take photos at concerts. It is usually a maximum of two and it is always of the band. I don't want a photo of myself sitting in a chair at MSG DURING the show. That's just stupid. But these two...they were recording entire songs because they are clearly video archivists who will most certainly watch the video they took all the time as it takes up space on their phone; it was worth the sacrifice of missing the live performance in front of their faces. Again, my fellow concert goers just inspired a melancholy in me. Or maybe it was the music?

Aaaaanyway, I'll leave this entry with the two photos I took in between songs. 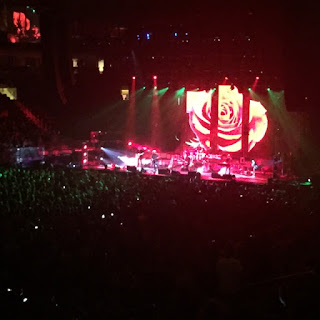 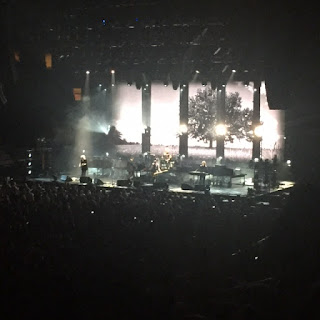