You should read "The Fault in Our Stars"

An adjective to describe me physically at the moment is sneezy. Or nasally dripping.

But that's not why I'm posting. I'm posting because I need to keep current with this blog, else it will fall the way of my last blog and though posterity would not weep or even really take note, I'd be disappointed. Rather than regale this blog with the details of more drunkeness in addition to the fact that I'm distracted by my sneezing I'll just share a line in the book I'm reading that made me go all kinds of whoa after I read it. It is from this book: 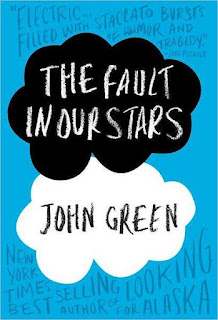 which, incidentally, I'm not done with yet but I can already tell is going to end with me curled up in my bedroom like the heroine of an avant garde French film in my slip, questioning why life is so fleeting. (Alternately, I'll be holed up in my darkened apartment, weeping.) The protagonist is a teenage girl with cancer and she meets this guy, with a capital G who befriends and likes her despite her attempts to help not like her that way. (She describes her illness as making her "a grenade", which as a metaphor for being sick with cancer is probably the most striking and apt one I've ever heard.) In this part of the book he has come over to cheer her up and starts to read to her aloud from her favorite novel. There is just so much about even the skeleton of the plot and characters that just kills me but anyway, here's the line that gave me pause:

As he read, I fell in love the way you fall asleep:  slowly, and then all at once.

Yeah I think it is pretty much one of those books.