noun
1
: the state of being old : the process of becoming old
2
: the growth phase in a plant or plant part (as a leaf) from full maturity to death

Today's word of the day is one I have always loved but rarely get the chance to use in everyday conversation. I put it in a poem once, using the second definition but if it is ever going to work in a standard conversation, it is going to have to be about getting old. For example: "I am not old. I am in senescence." Typing that out brought to my mind, for some weird reason, an image of being enveloped inside a web like cocoon, just like Frodo in the Lord of the Rings and as a result, maybe I don't want to use it in reference to myself in a conversation.

Also, when I say the word out loud, I'm actually surprised that there was not one band in the 90s that used this for their name. How could one not love a word that calls to mind so many things? What? Not everyone is a fucking dork? Ok, then.

Though I have no particular need to, I have thrown myself headfirst into work. Most of this I owe to other people making my schedule and some of it I owe to a deep panic about making less money. Still, there is a small part of it that has to do with my desire to create things and I'm holding on to that with white knuckles. The tight grip feels good though. It isn't fraught with "I want to do so many things but have no time" anymore. It is fraught with "I'm going to do this if it kills me." Sometimes raw determination, generally the very last stage of creativity before imploding, is what I need. Or a looming deadline. Either way, I am making every effort to not be idle.

Very few things hasten the state of senescence like working all the time. Yet when I'm extraordinarily lazy all the time I feel too old to be doing it. For example, the other week when I my local world was having its identity iced out by the unforgiving mean girl of winter and I lucked into a few snow days, I did nothing. I didn't leave the house, didn't clean up my apartment, didn't really write much. I watched movies, read some magazines. At the end of those few days, I felt worn out and old, too old to be that unproductive. When early evening rolls around and I'm wearing the same thing I wore when dawn broke, it feels like I'm one step closer to being gone forever. Of course it is a truth that just is on every day that passes but at the very least when I go to work, I can distract myself enough into thinking that at least I'll have done some small thing that will be evidence that I was there. I know it is all so stupid but it is how I've been feeling lately. So I suppose I'm grateful for the neverending work.

And because I'm a little bit of a masochist (who isn't?) I may blog every day next month. I'm not 100% on that yet though because in my senescence, I have grown fickle and noncommittal. No, I was always noncommittal. I just admit it now.

I long to have something interesting to impart in this entry but alas, I was just trying to kill some time during a lull at work. But it isn't strictly a "lull". I have things that need doing but no motivation to do them. Here is a real time snapshot of my desk and all of those papers represent something I need to process in some way, the magazines are trade journals I need to read through. On a scale of "I can't wait to do that" and "I'd rather sleep", I'm at a level "I want to run. I want to hide. I want to tear down the walls that hold me inside." 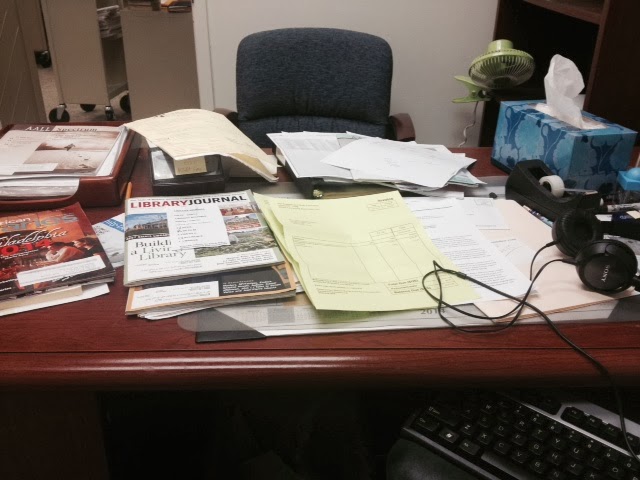