And now we come to the last blog about Paris (for now) and we can all go back to the halcyon days of me having nothing to do or say of any importance whatsoever from the long, long LONGNESS of Long Island.

The day began rather late due to the heavy drinking that went on the night before and I had wanted to do a last minute touristy thing to either the Musee d'Orsay or the Musee Rodin. The day before on our way to the RER train of destiny we saw the Musee d'Orsay and I really feel like if you've seen the front of the building you have seen the museum which is probably why until I just looked at my notes that i realize that we didn't even actually go inside. I've been including it on my list of "stuff I saw" in the retelling of my trip and what can I say about that except that I drank a LOT on this trip so my apologies for my open faced lies.What happened was this: we took the metro to the Musee d'Orsay and had planned to go in when we realized that we had been granted yet another amazing day of clear and bright weather and opted for the Musee Rodin.

But before that, since we got a relatively late start we decided to go for one last salad. I'd like to marry each and every salad I ate there but that would be impossible since I ate them. We picked a place that was right near the metro stop and it was just about lunchtime so it was hopping with businessmen eating gorgeous plates of various meats and drinking quite heavily. Awesome. It being Paris, there was also a fair share of couples swooning and sharing their third courses. I don't actually see how Parisians work. I mean they seem to spend hours drinking coffee and eating and this is why I must live there immediately. But I digress. Salads. Oh salads how I miss them on the very warm and rainy afternoons that have been happening since I returned. Could it have been just one week ago I was a world away?

So after all that eating and observing we went to the Musee Rodin. Upon entering, I knew instantly we had made the right choice. I had only ever been familiar with Rodin's famous works like the "Thinking Man" and the general attributes of his sculptures; the sinewy, sleek marble, the dichotomy of realistic humanity portrayed in marble. 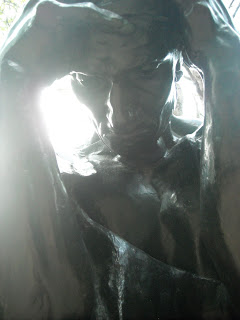 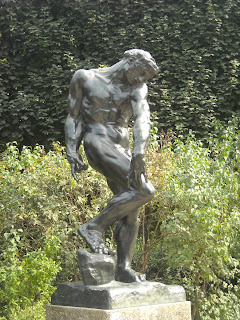 This was my favorite scultpure, called "Dreaming": 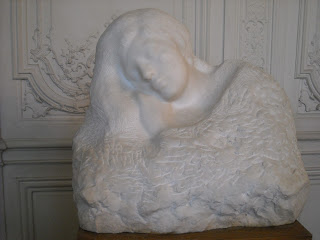 I was glad to be seeing the sculptures for the first time in that setting. It was remarkable. Again we were blessed with perfect, if a bit cloudy, weather and we lingered over the works and on the grounds for hours. It being our last full day in Paris, I think we all accepted the fact that we weren't going to do much else and just decided to relax into the experience of the place we were in. After touring the grounds and the museum (this was Rodin's Paris residence toward the end of his life) we decided to get some glace, relax in the picnic area and while away the hours like proper Parisians.

A couple of observations from that afternoon:
There was an art class touring the museum at the time we were there and they had been given an assignment to sketch a statue of their choice. In fact there was a lot of that going on that day and, I presume, everyday. There was an artist there, a young woman, who was the skinniest person I've ever seen. Her body curved in on itself and took on the shape of a question mark. I thought she was someone Rodin would have loved to sculpt.

I don't lie around in the grass looking up at the blue sky enough back home. I need to do more of that. (And more of walking around everyday and wine drinking. I really believe all of that is good for me.)

This was pointed out by Rowan: a lot of the Asian tourists we saw took souvenir novelty photos and never just one normal one. Either they would be flashing the peace sign, or chanting a little song before the photo was taken or something else equally quirky. This was true at every single touristy place we went. They have fun with their photographs.

We stayed for a few hours and then decided to head back to the Latin Quarter for a drink and then some dinner. On Tuesday we had gotten lost in particular neighborhood and were determined to go back there. Again, I have to credit Rowan with her navigation skillz and soon we were back. We sat on a street bar that advertised happy hour and frankly had the only open seats, it being Friday evening and all. We ordered margaritas and they were gross. Also gross? The sewer smell that would waft up every five minutes or so. The available seating at this place was becoming explainable. When the couple sat next to us began feeling each other up, we decided to walk on. I'm glad we did because not only did we find a shop where I found these amazing red earrings, but we also found a shop that sold nesting dolls. Unfortunately they were so very overpriced that I was not able to add to my collection (and there was nothing overtly French about the selection) but I was happy to see that yet another city had a shop dedicated to them.

We came across a dive bar and went in for a kir and some beer and honestly I could have stayed there all night. There was a young student-y crowd in there and a small but strong selection of extraordinarily good looking people. Why are the French so cool and good looking? I don't get it. But they are. It appears they live in one long Truffaut film. I wanted suddenly to be 10 years younger and just starting out. Bastards.

We decided to go for Indian food, it was a whim we followed and it was the right choice. We had an amazing dinner with more wine and laughter and the bittersweetness of a vacation coming to a close. After dinner we walked along the Seine and saw all the couples sat along the banks drinking wine and kissing and it was all so very romantic and just exactly what I wanted from Paris. I wanted to run into Owen Wilson. But I settled for the amazing everything that was this trip. Nothing seemed ordinary in Paris and I will be returning.

We went back to the apartment to drink our last bottle of wine and reflect on the trip that was. I hate how quickly everything good ends.
The shuttle came to collect Lorraine and I in the morning and Rowan hopped a train to visit her friend in the south of France. On the way to the airport the shuttle driver, a very handsome French man who looked a bit Jesus-y asked if we had a good time. I wanted to tell him everything and then ask if I could come home with him and marry him and stay forever. Instead I just said "Paris is beautiful. You are so lucky to live here." He said "I know."
Posted by Allison E at 11:09 AM