Sunday in Paris. I sound so pretentious. But that's what's up.

As a quick side note, all photos that appear in this post are courtesy of my sister Lorraine, who has a domain name and the skeleton of a website for her photography but it is not yet complete otherwise I'd link it here.
As a second side note before I begin, a brief word on why I'm here, when I'm here: the anniversary of Sept. 11, 2001 is today. For me and more importantly for my sister the events of September 11 were not a 2 hour documentary or a years long news sound bite or a selling point for why America is #1. My sister narrowly escaped the towers (she was in the building when the plane hit) and lost a lot of friends in the aftermath and we both, along with a very good friend walked across the 59th street bridge with hundreds of thousands of other New Yorkers in the shadow of the actual physical towers. September 11 is very, very personal to both of us, more so my sister. Last year as the 10th anniversary approached, my sister expressed the deep seated need to not be present for the inevitable daily reminders of that terrible time. And when I say daily reminders, I mean hourly reminders. The stories retold and retold again, the 911 calls, the images over and over again. I was in full agreement and we made a pact to be out of the country on that date and taking part in all the things that make us happy, that make our lives enjoyable and worth being around. Is that understandable? Is that reasonable? Are we being callous? I guess that depends on who you are and what you believe but the fact is, I'm here in a place I've always wanted to be, celebrating life because if I learned anything on that day, it was that life does many things but the most important thing it does is that it goes on. 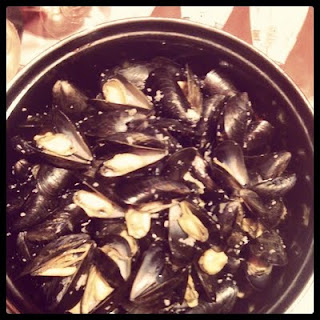 I apologize for the above photo if any of you reading this are allergic/don't like seafood/are anti-taking photos of your meals but good LORD that right there? One of life's many pleasures. Moules accompanied with frites. (aka Freedom fries, lmfao)

Yes that was part of our first meal here, that is to say what Rowan and Lorraine ordered and what I now desperately wish I had ordered. Not pictured is what I ordered. What I ordered was called, rather innocently andouillete, which as a born and raised Louisianian, I had confused with the American version of Andouille sausage. Andouille sausage is something I have enjoyed on many, many occassions and so I ordered it. What I got was what has come to be known over the last two days as "loose meat". I'd venture to describe the texture and visuals as "entrails" or "gross" or "nastiness in a casing". In fairness to the top notch brasserie we were eating in, I'm only a fake, part time meat eater. I have only temporarily suspended my nascent vegetarianism for France, land of meat. Also, why I would order sausage right out of the gate with no regard to how gross sausage can really be in a land of meat, well that's on me. In the end, when accompanied with me picking up several of my dining companions' moules and the top notch bottle of rose we got, all was well and the andouillete made for a good anecdote and inside joke and really, who doesn't like that?

And we returned home last night, and I posted yesterday's drunkenness and I began this post vaguely sober and as the hours tick by, that changes. I simply cannot stress enough the quality of wine that exists in this country. If you arrive in Paris as a non wine drinker, you will not leave without being a wine enthusiast. That's the Allison guarantee.

Moving even further on, the apartment in Paris that I am staying in is kind of totally incredible. It is small, it is Parisian and it is perfect. Apart from the tiny detail that it is directly on a busy street and I am a light sleeper but some auditory protection in a box that I purchased earlier today should correct that.  Also, jet lag jet lag jet lag. It is a very real, very first world problem.

Today we visited the Louvre, the mother of all museums. I saw everything famous about the museum: the pyramid out front: 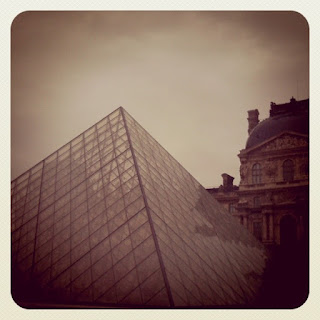 The Mona Lisa (not pictured because you know what that looks like), Venus de Milo, Psyche and Cupid and lots and lots of art in a ginormous building that is a work of art in itself.
Our visit to the Louvre was well timed as it was pissing rain the entire time we were in there and well into the hour or so after we left. As a result we decided to sit in a cafe and while away the hours eating and drinking and laughing. I wouldn't be me if I didn't mention what I ate so I'll just mention part of it: cheese. Cheese from the gods. Cheese as there has never been. I can still taste it, like the scent of an old lover on a pillow. Did I just compare food to a lover? I reveal more of myself through these posts than I wanted...

By the time we ended our meal the sun had come out and we wandered for hours back past the Louvre, through the Jardin de Tuileries and the Jardin de Carrousel and unforgettably we walked along the Seine for aways, my shoes ravaging my heels and then we got this close to the Eiffel Tower and then went "meh, let's get the bus and go home and drink wine."--Rowan Campbell. The Eiffel Tower is on the schedule for the coming week....the coming WEEK of which I still have several days left!

Currently it is 10:30pm. I'm seated at a table, watching Rowan trying to drunkenly paint her nails and Lorraine grooving to Busta Rhymes and I'm trying to get her to play Basement Jaxx. Oh and drinking wine. More a demain....
Posted by Allison E at 4:33 PM