I wish our waiter would just stop.

We got some oeufs: 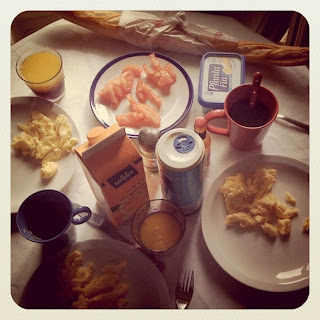 and ate a very non Parisian style breakfast at home. This afforded us some well deserved rest from our drinking and vacation. First world problems.

Lorraine ventured out to get us a fresh baguette (see tally) and walked home triumphantly hoisting it in the air like the trophy it was. Side note: instant coffee is the same everywhere.

We hadn't really planned a schedule for today other than the need to see Notre Dame and the Eiffel Tower. We ended up beginning with a visit to Notre Dame, the holy mother of all churches. A word about Paris public transportation, and forgive me if I use NYC as a reference for everything but that is how my mind works when it comes to cities. Paris' public transportation is eons above and beyond anything in NYC. It is on time, it is clean and it goes where it says it is going to, even in the rain! IMAGINE! The announcements are clear and easy to understand and in two languages, French and English. There are plenty of seats and plenty of room to stand. The same is true for the public buses. Thanks to Rowan, we have been navigating the city with ease and making good use of the bus and metro systems. So bravo to France. /gush

Notre Dame is the biggest fucking church I have ever seen in my life. Not that I am a seasoned church goer...I've seen all the cathedrals in NY, the Montreal version of Notre Dame, Westminster Abbey and a handful here and there but seeing Notre Dame for the first time made me wish I had gone to confession. The building inspires fear and awe and a surprisingly very human appreciation of what it took to build something so grand. We did almost get run over by a Japanese tourist wearing a suit who was rushing to get ahead of us and ended up standing next to us, waiting to cross the street. Another side note: that old addage about French people being rude? I have found that to be false. The only rudeness we have encountered here has come from other tourists. Wtf? What you see when you approach. Yeah, did you go to confession today HEATHEN!! 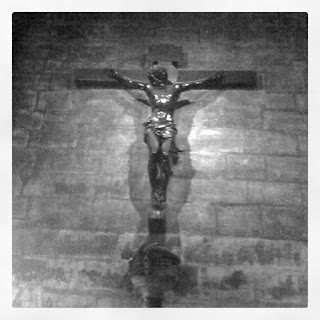 I feel guilty.
We toured the length of the church and because we were lazy idiots, the line to get up to the bell tower and reenact Quasimodo and Esmerelda (because NO ONE has done that before) was unrealized. Instead we walked around and behind and began a very, very long walk that lasted no less than 7 years. I am now 42 years old. In all seriousness though, you cannot come to Paris and not expect to walk. And walk we did. Some highlights: 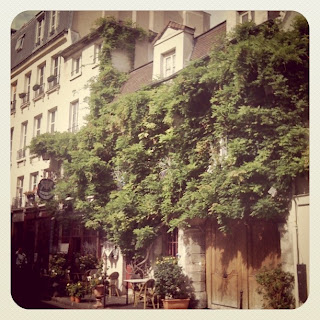 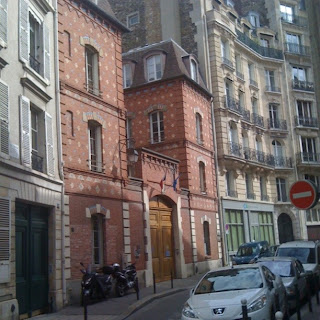 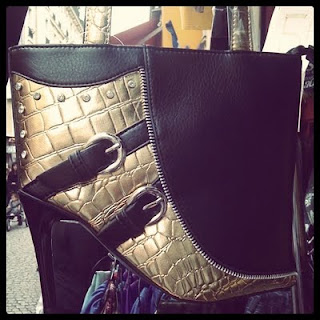 That last one is from yesterday's trip to Montmarte but I forgot to include it in the post. It is a purse in the shape of a gold high heel shoe.
We walked along the Latin Quarter's cobblestone streets and branching off commenced and never ended. Just an endless array of amazingly beautiful buildings and streets. I don't think the weather could have been more perfect if we created it ourselves. September is the best time to be here, fuck the springtime.
We continued to walk and get lost in the maze until we ended up in what looked a lot like Soho in Manhattan with art galleries and antique shops and no creperies, despite our desperate need/desire for one (again, first world problem). But we stumbled upon a boulangerie in the middle of nowhere and bought croissants, the first of the trip and eating a croissant in Paris is....I can't think of a word to describe this experience so I'll just say gagagagagagagagagaaaaaaaaa. Good? Good.
Again, Rowan is the master of map reading, public transport navigating and in no time, we were on our way to the Eiffel Tower. Little known fact: The Eiffel Tower is named after the designers Steve Eiffel and Bob Tower. If you visit the tower all the way to the top, you can see wax figurines of these two great men who'd waited so long to get to the top, they turned into wax. True story.
The Eiffel Tower is humbling. It is gorgeous and huge and imposing and glamorous and because it is such an icon of this great city, when you first see it, it doesn't quite seem real. Also, if you really have to pee when you get there, the existence of toilets don't seem quite real until you realize that they are on the outskirts of the base of at least the east leg. Remember this if you ever go. 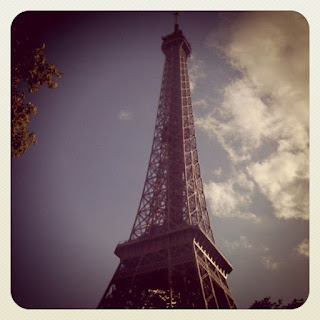 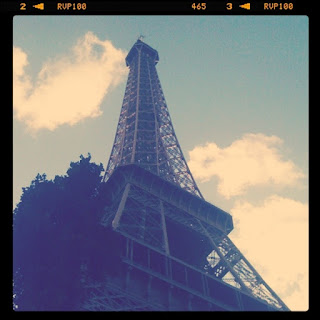 Notice the bright blue sky in the background. The day was so clear. It was a postcard.
We spent roughly 3 days on line waiting to get our ticket/waiting for the first elevator/waiting for the 2nd elevator but the view from the 2nd level is hands down one of the most beautiful things I've ever seen. Hemingway once said "There is never any end to Paris." When you see the city from the very top of the Eiffel Tower, you believe him completely: 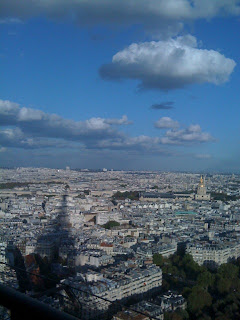 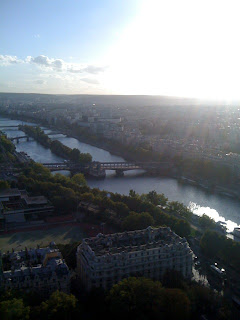 Those are just two of Lorraine's shots. As we ascended the elevator I got choked up with that first view and there was a collective gasp inside the packed elevator.  It is surreal.
Some comedy from the trip up:
As we waited in a packed group to mount the first elevator there was an extremely large man who paradoxically did not want any part of his body to touch anyone else's in close, crowded quarters.  Rowan's shoulder bag brushed against him and this sent him into an awkward ass dance in order to avoid making contact with anything/anyone else. "He was a tool"--Rowan.
Lorraine lost her entrance ticket on the second level, an outdoor level with so much wind that all our photos make us look like mental patients and when we retraced her steps, it was lying flat where it dropped. A miracle, if ever there was one.
The elevator to the very top was frightening. So frightening that the goth chick with the pireced septum had to stand in the center of the elevator and hold on with eyes closed and the 6 foot 8 man standing near the door said in a little boy voice "I don't wanna stand near the door anymore."
When we entered the enclosed top level it smelled of "popcorn and sweat"-Rowan. After the awesome view of the 2nd level, being in an enclosed, smelly crowded room at the top was a bit of a disappointment and when you climb up the one flight to the open air part, you are kind of always picturing the tower toppling over while you clutch a stranger in a panicked bid to stay alive, no matter what occurs. Or maybe that was just me.
Then we waited another six years to descend. All kidding aside, visit the Eiffel Tower. Even if you have one day in Paris, it is amazing.
By the time all of that had finished, our stomach linings were dissolving in hunger and we went in search for food. The tentative plan was to visit Harry's New York Bar, as that has always been a place I've wanted to see due to its Hemingway ties and the fact that the Sidecar was invented there. It was a bit late however and by the time we got to the Opera district and finally found a restaurant, we decided to just finish our dinner and head home for oh maybe we had some wine ok?! Stop looking at me like that.
Oh our waiter was a manic energetic ball who claimed that when Bush was president, no Americans came to Paris but now that Obama has been president, he sees so many more. He also put on some pantomine and told unintelligible jokes in such volume that when he walked away Lorraine said "I wish our waiter would just....stop." We all did Lorraine. We all did.
I'm a day behind on these. I'm on vacation so excuse moi. G'night!
Posted by Allison E at 5:58 PM