Pressing every button you can find will land you in Versailles

Alors, on Thursday we headed for Versailles. I usually have mixed feelings about visiting the grand homes of the past, especially the caliber of Versailles simply because no matter how beautiful they are, there is always that sense of "man, were these people assholes or what?" that pervades my brain and does not let me simply enjoy prettiness. But I immediately digress. I've admired photos and documentaries and silly portrayals of King Louis(es) and Marie Antoinette and am always intrigued by the hot sweltering mess that is royalty and so Versailles was a must for me.

I know in my last post I praised the efficiency and honesty of the Paris metro. I stand by that...with one very glaring exception. The RER trains. There is a very distinct lack of/confusion inherent in the signs that populate those railways. We took the metro to a stop that said "RER C" train connection which is what one needs to get to Versailles. Ok, so usually, and I'm just going by my 10 years worth of experience with connecting trains in the tangled spaghetti of the NYC subway system, when the map says there is a connection it is usually through a tunnel of some kind or up or down some stairs. And in keeping with the infinite branching of the city, we followed a series of hallways and stairs expecting that at the end of each would be the RER station. Instead we were lead to the street level. I'm sorry, I'm just laughing out loud at how confused we must have appeared to passerby. I had the sensation one gets when one is on an elevator expecting the doors to open to a familiar floor and finding that the elevator has not moved. To make a long walk a short story, the RER train is connected, via about three blocks on the street with an entirely different ticket needed. Not that you'd know that. I can't tell you how we found out where to buy tickets or how to get there but I can relate to you the following anecdote:
Sometimes when a DVD player or television speaker system is on the fritz at my folks' house my mother will often just press every single button on every remote and device she can find until something changes or works. That is essentially what we did. We visited each kiosk and pressed buttons. Eventually we ended up with tickets.

While all THAT was going on Rowan befriended an elderly New Zealander travelling alone and shaking. I'm exaggerating but seriously, this man was 90 million years old. He was very sweet and just as lost as we were so he was watching as we pressed every button in the room and then asked for tickets from some dude, two levels below the entrance to the RER. So he waited with us on the platform we assumed was the correct one (turns out we were wrong on that count as well) and the platform started to fill up with more and more tourists looking beleagured and confused. I tried to make sense of the posted train schedule but it simply looked like a physics equation and I figured we could just follow the group that looked the most confused. Barring that, we could find more buttons to press.

The train arrived on the wrong platform, there were no signs nor annoucements in French or any other languages and this resulted in all of the tourists crowding on the train, some with one foot on and one foot off just shouting over and over again "VERSAILLES? VERSAILLES? VERSAILLES?" Imagine that said over and over WITH increasing panic. We all assumed it was the correct train though why, I have no clue and took our seats.

Then I looked over at the set of seats next to us and I saw this woman:

aka the Madame Bijou that Jack Dawson, the dude that couldn't figure out that if he laid down sideways next to Rose Dewitt Bucatur on that huge door that he could have lived too. No but seriously, this woman was sat next to us on the train to Versailles only on this day she wore these blue cat eye, bejeweled glasses. So that was entertaining.

Then, after waiting on a short line to get tickets and me getting my cafe noir to go we made it to Versailles. A few of Lorraine's photos from the iPhone: 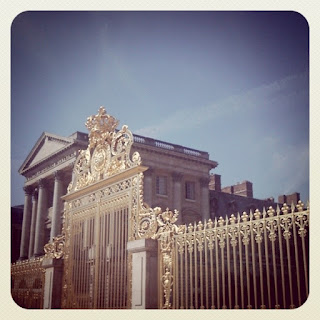 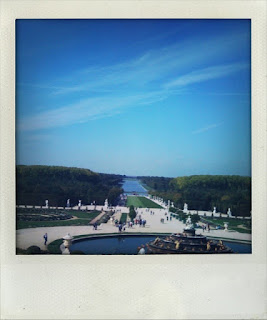 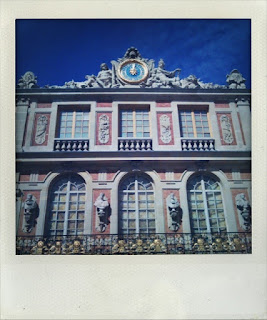 Yeah, so those beautiful photos only vaguely capture the grandeur and ornateness and the size and shape of the palace. And again might I point out the blueness of the sky? Yet another postcard perfect day.

Sharing the experience of Versailles with about 4.5 million other tourists was annoying in the same way that visiting the Met in NYC is annoying; there is tons of shit you really, really want to see everywhere but the sweaty, adoring public is obnoxious enough to distract you from the fact that you are surrounded by all of this beauty. Also, I think three of us were famished, having had our pre-packed lunch of salads and sandwiches confiscated at the gate (which I understand completely as I'm certain there are people who exist at this moment just waiting for the next time they can leave their refuse behind on a pristine manicured lawn that is 500 years old). So we swiftly walked through the rooms, never really lingering anywhere but the hall of mirrors and I truly defy anyone to not linger there.

We finished the tour, reclaimed our lunches and sat out in the courtyard and ate salads (the French make salad an art form, even in the prepackaged incarnations) under a very, very hot sun and headed back to Paris.On our walk back to the train we heard an honest to goodness, stereotypical French laugh. I won't insult anyone here by typing it out but YOU know what I'm talking about. It was on my list of things that absolutely had to happen while I was in France and so I ticked it off the list. Brilliant.
Rowan then had an utterly amazing idea to get out of the RER at the Eiffel Tower and go and lounge in its shadow.

Here's a photo of her, soaking up the sun: 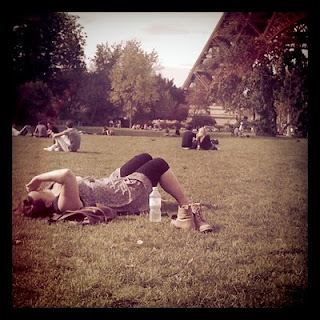 Not pictured in this photo are the couple seated to our right and the couple seated to our left. The couple to our right seemed to be platonic friends drinking wine and laughing over a packed snack of French stuff. The couple to our left sat silently while she chain smoked and he looked on at the passerby, mutely. Neither of them looked like they were having any fun whatsoever. They will be important later.

So Rowan napped and Lorraine and I sat up people watching and being stupid and we saw this young girl in a very long skirt accompanied by a person in a gorilla suit. They were walking around from blanket to blanket and person to person just putting out their hands. Some people would give them change or some food, utterly nonchalant (apparently this happens often). Lorraine observed a group of Asian tourists taking a novelty shot (sir) and the gorilla suit person jumped and scared the ever loving shit out of them. It wouldn't surprise me in the least if one of them later discovered their wallet/phone/camera missing.

A short while later the couple to our right had laid back and were soaking up the sun quietly when they were approached by three pre-teen looking girls. They exchanged a few words with the three girls surrounding the guy who was shirtless and relaxed on his side. I can only surmise by his tone that he told them nicely to fuck off. So fuck off they did. The chain smoking woman to our left shouted something to the guy and he suddenly began looking for something in his pockets. Turns out those teenage girls stole his phone. I really don't know how they did it because I watched them all throughout the conversation. He immediately got up and ran after them and I watched him as he yelled and demanded his phone back. They were calm and not at all surprised and threw his phone back at him casually as he flipped them off. He walked back to his friend and they walked off in a different direction and the whole scene ended as quickly as it began. Who knew such dark grey deeds took place at the base of the Eiffel Tower? Well they do. Also, the lawn smells vaguely of poo. But that can't be blamed on thieving teenagers. Or can it?

After patting ourselves down and accounting for all items of significance, we decided to head home, freshen up and then go out to dinner. Only when we got home, we were so full of vitamin D and maybe a few glasses of wine that we decided to cook dinner at the apartment and save our energies for the next day. What followed was a lovely dinner with many, many glasses of wine and the drunkest night of the trip. I'd post photos of the antics that followed except we didn't take any and I'd kind of like to keep those memories undocumented.

I've got enough notes for a few more posts and those are sure to happen as I long for the fresh air of Paris from inside my windowless Long Island office. First world longing.
Posted by Allison E at 3:13 PM