You are going to want to rub this, or a trip to Austin, Texas

Oh boy. BEDD is dead. I took a seven day break that was originally meant to be a three day break while I was in Texas. Then I came home, felt depressed that home wasn't anywhere near as cool as Austin. Then Christmas and all familial and friendly accouterments floated to the surface and I felt better. Time off from one of my jobs meant whole days unaccounted for; I am unaccustomed to so much free time with no schedule. Apparently my body is as well since I haven't been awake before 10am this whole week. Each  morning I awoke disoriented, cats appraising me expectantly. How strange to have nothing to do, nowhere to go. I feel indulgent, like maybe the part of "woman who owns fur coats and real strands of pearls" will be played by me, one week only.

Anyway, Austin. Visiting Jason has been on the list for about a decade. Spending time in Spain and later in New York with him was the boost I needed to remind me of the equation: Good friend + Place you have never visited = Go visit now. It seems to dwarf the experience by just saying "it was a really good trip" but that's what it was...a really good trip. Now, how to invoke it out of my brain and into yours. How often in life do I long for a real life Pensieve?

If I told you that on the plane there I had an entire row to myself all the way in the FRONT, would that tell you what mood I was in when I stepped out of the airport into the (mid-December) 65 degree sun of Austin, Texas? How about how Jason drove me directly from the airport to my first tacos of the four days worth of tacos I was destined to eat? There are truly few things I enjoy more than having a coffee or a drink and a long talk with Jason and this trip was rife with that, beginning at the Kerbey Lane Cafe. In fact, out of the ten places on that list in the link, we ate at/visited four of those without ever being aware of that list's existence. I effing love visiting new cities with locals.

I could tell you that we played ping pong at this place outdoors (again, in December) after drinking several cocktails called "Tiger's Blood" and eating candy cigarettes. I noticed at that bar and a few hours before that, while we walked along a street dotted with shops and restaurants that there is nary a beardless young man in Austin and if you know anything at all about me it is that if I had a bumper sticker tattooed on my, uh, bumper it would read "I Brake for Beards." So yeah, I liked the look of the city.

Does it communicate anything to say that Jason's house is situated alongside a creek that practically begs a person to skip stones across it or that one of his roommates is a big furry adorable dog that greets you upon entering the house, belly up as if to say "you are going to want to rub this"?

If I told you that at one point during the trip, Jason and I were driving down a dark, half deserted road on the way to his friend's house listening in rapt attention to the isolated vocals of David Lee Roth's "Running with the Devil" and giggling, would that give you a sense of how I spent my time in Austin? At the end of that road is his friends' beautiful house with a sunken living room and a dark wood piano, and a big bright beautiful kitchen. I wanted to draw hearts around the building. They had built a small fire and my scarf still smells like cedar wood. Mental note: sit around fires more often.

While in Austin, I went to hands down the coolest bar I've ever been to and honestly, I have been to many, many bars. This was the place: The Eastside Showroom. I drank a spectacular Pimm's Cup and caught the end of a performance by Blue Squeeze Box.(I am listening to them as I write this post.) I want to transport that bar to my hometown so I can go in there and live. Another impressive place was called the Whip In which was an Indian restaurant/bar/liquor store/live music venue. I don't know if places like that are unique to Austin but it makes me wish a business like that could open and thrive here.

I visited the Texas State Capitol building. I'm just going to include two pictures to give you a sense what I did there. First, here's Jason in a photo I took from about four floors above. And secondly, here's a picture of me at the doorstep of the building: 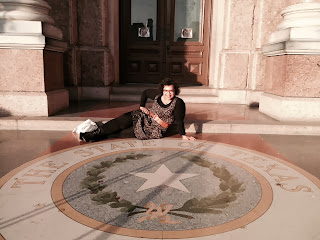 We got to see where Wendy Davis held her filibuster and on a lot of the walls are pictures of various senators and house representatives and oddly, photographs of babies. I asked an employee about these and he said they were included in the portraits to "remind the politicians of who they make laws for" but I just thought it was weird.

I ate my first breakfast taco. Memo to the rest of the world: make breakfast tacos a "thing" where you live. They far surpass breakfast burritos as they are just palm sized, contained deliciousness. I just made my own this morning but I'd much rather see it as an option at the delis up here, right next to everything bagels. Let's get this done.

I spent some time in the biggest motherfucking Whole Foods on earth. It was just so beautiful in there and I wanted to buy all the things while twirling and singing like Julie Andrews. I visited graffiti park and took this


I had the pleasure to hang out with several new people, all of whom were intensely cool and incredibly nice and interesting and funny. On one night in particular, I was invited to a girls' night with a group of women who I instantly connected with and when I experience a situation like that,being in a roomful of strangers and feeling at ease immediately I know something unique is happening and it feels like a gift. It made me think of Austin as a swirling vortex, drawing in all this creative, calm energy. I could sense pretty quickly why creative people find their way there and take root. That might be a mixed metaphor but I'm leaving it.

The four days I was in town flew by but it was a great experience and I'm so glad I got to squeeze this trip in this year. It means 2013 was the year of truly great trips. I can only try to top it in the future but it will be hard.

And now, back to long, long, Long Island. I have some year end stuff I want to post and I only have three more days in which to do it. Outlook, not good.
Posted by Allison E at 1:01 PM