When the Swallows Come Back to Capistrano

Last night I had the distinct pleasure of attending a performance of  Sleep No More at a venue called "The McKittrick Hotel" on 27th Street. If you aren't familiar with it, all you need to do is click the website here to get a sense of the atmosphere of the show or read my brief summary here:

Sleep No More is an interactive theater experience that takes place in a "hotel" which is really just a group of warehouses, outfitted to resemble a 1930s hotel and residence. The audience is instructed to wear masks and to not speak at all throughout the performance and can walk through the hotel at their own pace and in their own order either following the actors around as they pass through the hallways or by examining the artifacts left around the hotel. The actors don't really speak either apart from a few instances. There are five floors of this hotel, each with varying sets and the storyline takes place among these floors. The plot is loosely based on MacBeth and the set design, costumes, music, lighting...pretty much everything takes its queue from film noir so it is very, very dark and many of the scenes are played out in a mysterious, creepy way. The fact that no one speaks and everyone is wearing masks adds an other worldliness to the creep.

I have seen this play before, four years ago for my birthday when a group of some of my very best friends came with me. I'll admit to being tipsy that first go around but I was blown away back then by the level of detail and the truly unique experience of being immersed in this dark world. Since Rowan is visiting, and I had always wanted to return, we took her to see it. It is the kind of experience that is very individual and can be different each time you do it.

When you first enter the building, you have to "check in" to the hotel and you are given a playing card with a number and suit. You then have to walk through a very, very dark hallway that immediately offers a huge sense of disorientation. As we zig zagged our way through the corridor, I had the notion that it was an effective way to leave you feeling you had transported back in time, a notion reinforced when you enter a speakeasy type lounge where you wait for your card number to be called, after which you are transported to the hotel via elevator. Inside the speakeasy are already actors from the production, but you don't really realize it until they start talking; they sound very 1930s and are dressed from the period. There is also a singer and you can order old timey cocktails, of which I did. I had a gimlet and it was delightful.

I don't want to get into too many specifics about the actual show in case there is anyone reading this who wants to go (I'll go with you!) and doesn't want anything spoiled. But I do want to tell you about how the actress who played Lady Macbeth kidnapped me from my group. I didn't know this, since my first experience at the show didn't feature anything but me walking around the hotel following various actors but there are "hidden" scenes that selected audience members can experience if they are chosen from the crowd. Last night I got chosen and I'm not even certain how. One moment she was standing on the other side of the room, set up to resemble a closed piano bar, in a beautiful red gown and the next she was approaching me and caressing my cheek under my mask. She grabbed my hand and led me to the hallway outside the room, the rest of the group around me in tow. She whispered in my ear to stay where I was because she had "something special" for me. So I did as I was told and she disappeared behind a door. We were all waiting outside the door and a minute later she opened the door just wide enough for me to enter behind her and then shut it! I found myself in a small parlor that was blue tinted but mostly very dark. She started to caress my face again in a "we might make out" way. But instead she took off my mask and started cackling. Her lips were full and red and as she laughed, there was the sound of a thunderclap in the distance and the lights flashed as though there was lightning. I almost peed myself.

She said, as she was caressing my face that she had waited so long for me to come back. "I've been waiting for you, Agnes!" She was saying this as she dragged me to the sofa and started telling me a story about a shipwreck. She was pouring water into a teacup and then put a little origami ship on top of the water in it. The story of the shipwreck involved sightings of demons climbing the masts. As she told this part of the story, she started stirring the tea cup and it turned blood red. She jumped up suddenly and said it was the anniversary of the shipwreck and then she grabbed me by the waist and dragged me into this pitch black annex of the room we were in. There was water spraying from somewhere and I couldn't see anything but she was holding on to me and i was holding on to her and I felt the beading of her evening gown and she was screaming something about the waves...I couldn't focus b/c I was freaking out. The noise stopped but it was still pitch black. She stood behind me and put the mask back on my head, turned me around and kissed the top of it. Then she put something small and wet in my hand and said something like "remember that there are things done that can't be undone" or something and abruptly shoved me out a door and closed it again and I found myself totally disoriented in a room I had been in before but was nowhere near where I entered. Since you can't talk at all during the performance, I couldn't even tell anyone what had just happened! I looked at my had and it was a wet cotton ball that was blood red and had left my palm looking bloodstained. It is probably the coolest thing that has happened to me while wearing a mask. Maybe.

I was able to eventually find my group again and managed to make it to the end of the show without being kidnapped again. Here's a photo of my mask, with Lady Macbeth's lips on the forehead. 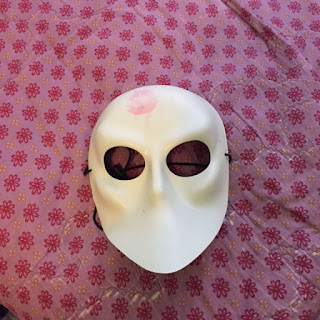 And even though I really want to describe in detail the entire experience (yes, that was just a small fraction of a two plus hour experience) it is really something that should be left to experience first hand. I'm certain there are other accounts of possibly even cooler scenes that have played out for people during Sleep No More, so I'll leave it at that.

Actually I'll leave it at this link to a song by the Ink Spots called When the Swallows Come Back to Capistrano that was playing at various times throughout the scenes and in random rooms of the hotel. It was used to pretty remarkable effect in really contrasting ways and it has been stuck in my head since last night. I now pass it on to you and you're welcome.