Such a beautiful library

At my second job, the library has set up a Veterans memorial wall. Veterans from the neighborhood can come in a fill out an application so their name can be featured on the wall. These aren't permanent stone plaques or anything as elegant as other memorials but it is something and it seems to be popular. In fact, out of all the community events that go on here, I really feel that this is one of the best ones. We have had veterans and families of veterans come in to fill out the application and then return to see their name as part of the display. They span generations and fought in different wars and different branches of the military. One of the main things they have in common is that they are all, unfailingly nice people. Some are downright sheepish about even asking for the application to be included. One gentleman said "I know it is silly but you have to remember these things." He was a Vietnam vet.

A few nights ago I met Vito. He came in with his daughter, who looked to be about 15 years older than me. He was carrying a bunch of papers because he had just registered for a beginner computer class. He wore a baseball cap that said he was a vet of the Korean War. With this huge smile on his face, he read nearly all the signs between the front door and the reference desk and this library has almost as many signs as it has books. I truly appreciate people who read and absorb signs. (Before becoming a librarian, I never truly realized how people blatantly ignore signs.) He kept saying what a beautiful library this is and it is so much better than his old library and how are you Ms.A? You could tell that he had been handsome as a young man. He still had delicate but defined features and big, expressive eyes that animated as he talked.

He came in to fill out a form to have his name included on the wall. An old friend and war buddy had told him about it a few months ago and he had been waiting for his friend to come with him to fill it out together but he just got tired of waiting and his daughter decided to come with him. While he sat there filling out the form he kept chatting and asked if it was ok if he took his beautiful new digital camera that his son had gotten him for Christmas and made a recording of the library to show his wife, who was convalescing in a nursing home in Mineola. I think the simplicity of that gesture, the thought on behalf of someone else, that she might like to see a virtual tour of "such a beautiful library" as she sat in some small room with other patients, all of that just shot straight to my heart. I wanted to spend hours in an editing room, splicing together a documentary masterpiece of vivid colors and fascinating stories (fabricated, by necessity) of the library so they could watch it together, holding hands and drinking chamomile tea.

Meeting Vito prompted me to read about the Korean War, since it is something I know nothing about. I've been to D.C. many, many times and not once have I visited the Korean War Memorial. I'm intrigued by the photographs, though: 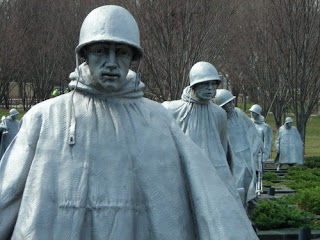 I will go there next time I'm in D.C. Road trip anyone?


Also, it isn't lost on me that my workplace, this place I generally dread coming to, is video worthy to someone. It is beautiful enough to him to want to take and share a video. I wanted him to lend me that perspective. Seeing as that is impossible, I resolved to stop complaining about it. I hope that sticks.