The tank is empty today. However, I would like to share with you some letters of advice I just read in a book about old Hollywood that were penned by Bette Davis. Apparently in 1942 she wrote a "Dear Abby" sort of series for a fan magazine. Her responses are hilarious, smart, realistic and I can actually hear her voice when I read them. Among the ones about "going all the way" with a boyfriend being shipped off to fight a world war, a lot of single women seemed to seek out her advice on how to meet a husband (she DID marry four times). And she also used to look like this: 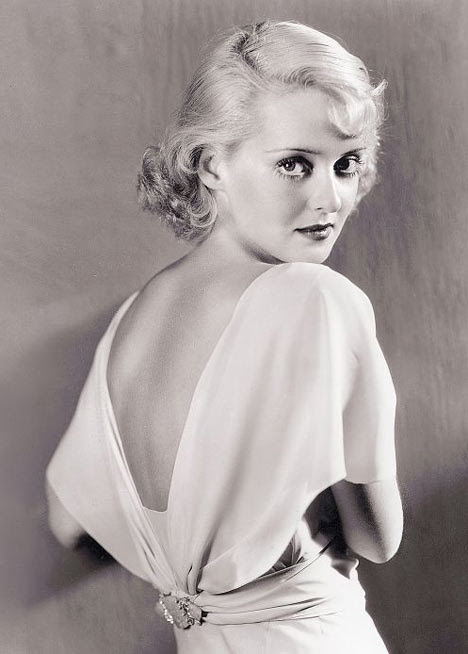 Anyway, I hope you enjoy these as much as I did!

I just saw The Man Who Came to Dinner for the third time. I liked the way you played Maggie Cutler very much, probably because I am a secretary myself.
I am now doing my hair up high the way yours was done, but still I'm no prize package. A beautiful, famous, elegant lady like you probably has no idea what it means to be awkward and self-conscious. I just know, to look at your hands, that you've never bitten your fingernails. I'm ashamed to admit it, but I have an awful time keeping my nails above the quick.
I might as well tell you all the things that are wrong with me in hopes you will be able to help me. Whenever a man pays attention to me--and that isn't very often-- I can't think of a thing to say. I feel all tied in knots and I just stand there sort of grinning and wishing the floor would open and drop me into a well.
I'm not exactly a dumb bunny because I got good grades in school and my three older sisters nag at me and say I wouldn't be bad-looking if I weren't such a goof.
I'm twenty-two years old, 5'8" tall and I only weigh 115 pounds.
I won't take up any more of your time, dear Miss Davis, but I thought you might be able to help me. I get so blue sometimes. This is what I want to know--how can I gain poise?
Anxiously yours,
Ruth Ann W.

In the first place, since you are working and are, therefore, financially independent, if I were in your place I'd take a room in a guest house, so moving away from those older sisters who, by their nagging, would probably give beauty Hedy Lamarr an inferiority complex.
Paint your nails with the brightest red polish you can find and see if you aren't too pleased with the effect to spoil it by nibbling.
You are tall. Do you stoop when you walk? Some of the loveliest girls in pictures are tall--Alexis Smith, Gail Patrick, and Rosalind Russell, for instance-- and each of them is as straight as a ramrod.
Finally, the best way I know of gaining poise is to forget yourself entirely and to direct your attention at the person with whom you are talking. Wonder, if you can't divert yourself otherwise, how he or she would look in a bathing suit. Remember those celebrated lines:

When pompous people squelch me with cold and snooty looks
It makes me happy to conjecture how they'd look in bathing suits.

Develop a system of controversial topics to put the other fellow at his ease and you'll be surprised at your resultant calm. Ask, "What picture could you bear to see once a week for the entire year?" or "What was the most frightening thing you ever saw?"
Relax and you'll be all right.

This is not the typical "fan" letter. I have never before written a stranger a letter, but I suppose there is a first time for everything.
I'm a widow, Miss Davis. I'm only twenty-seven, financially independent, and I have a rather good education. But I can't seem to meet the right sort of man. I try not to be too particular; I've done all the usual little stunts such as going out with a perfect bore of a man just on the chance that I might meet someone interesting. Alas, I meet only more bores.
Worse, practically every man who takes an interest in me eventually works around to the old cliche--"Well, well, are you a merry widow." In the town in which I am now living only a girl who will try anything once is considered a good sport.
I don't intend to sacrifice my ideals for cheap companionship. Yet I don't want to live my life alone. So my problem is this: How can I meet a "good" man?
How does one attract a man one meets casually? And how does a girl who has been married keep a man interested while refusing to grant him certain taboo favors? I shall appreciate any advice you care to give me.
Most cordially yours,
Mary-Jo G.

In any woman's life, she meets only a few men who really appeal to her, so she must be careful not to drive those away. Life has a way of solving itself, if one doesn't push it too impatiently.
Apparently you are trying too hard to find a man to marry. Men can sense this hunting quality instantly and are frightened away by it. A man friend of mine once said, "Why do women let that acquisitive gleam come into their eyes after they have known a man for an hour and learned that he has a decent job, has pleasant manners and is free?"
Let that be a warning. If I were you, since you have a good education and are only twenty-seven and financially independent, I should travel about the country.
For some reason, a newcomer to town has special charm. If I were you, I'd take advantage of that fact. I think the only way to secure and hold a man's respect is to be good spirited company, interested in everything he says, but to also keep him guessing.
The best of luck to you,
Bette Davis

Is it just me or could that second one have been written today, 70 years later? Also, I don't know who the "man friend" she refers to is, and maybe I've seen All About Eve so many times that the two are going to be linked forever in my brain, but I picture it being George Sanders.