A word about some super talented people I know

I'm following up the post featuring my sister's photograph with one today about my brother Andrew and his girlfriend Kristen, mostly because I love bragging about the wonderful people in my life.

My brother Andrew is 12 years my junior, a surprise baby of the family. Though there are times when I can  contend this, Andrew is not a baby anymore. In fact, he's a full grown adult living in NYC, freshly graduated from college, looking for work and grappling with all the same things that plagued me at his age. That last point is again, often up for contention since every generation believes they experience things the previous generation "could never understand". Also, is 12 years enough to qualify as a generation? I go through periods when I feel like I understand the 20something set completely and other times when I can only express what I feel with a qualified "huh?" Anyway, I'm getting away from the point of this post which, for a refreshing change, is not me.

Anyway, Andrew and his girlfriend Kristen have been dating for no less than four hundred years. They met in college, art college to be exact and I am always interested in the projects they are working on, when they aren't working/looking for work/facing existential dread/awakening to the notion of "real world bills" that we all must awaken to eventually. The other night, over paninis and white wine, I asked about their recent work. And you'll have to forgive me, but I have never written about art in any official capacity so bear with me.

Kristen majored in fine art and she is a painter with undeniable talents. The very first work of hers that I remember seeing is a series she did when she was still in school that centered around paintings and sculptures of candy and cinnamon buns. She, along with the other students in the school, was given a small space to personalize and showcase the final projects for the year and I vividly remember the bright pink walls and the icing that seemed to coat the entire space. I remember being struck by how palpable the work was, despite the fact that there was nothing there to actually touch or taste, I distinctly remember leaving that exhibit feeling like I had indulged in something sweet. I also remember the golden coated candies that seemed rococo, like they belonged under a glass domed platter in Bach's house. So for a first impression, Kristen's art left me thinking the word palpable, which, the last time I checked, is a good thing.

She told me a little about what she is working on these days and the first thing she mentioned was patterns. Her most recent pieces have been focused on melding different patterns together in one piece. I didn't get a chance to see any of these paintings in person but all of her work, including the aforementioned candy work can be found at her website if you click here. When she spoke about the patternwork paintings, I was intrigued and seeing them there on the website, that feeling is validated. There is an ordered chaos to these pieces that I completely appreciate. I wish the works had names or reference numbers but I'm thinking specifically of this one: 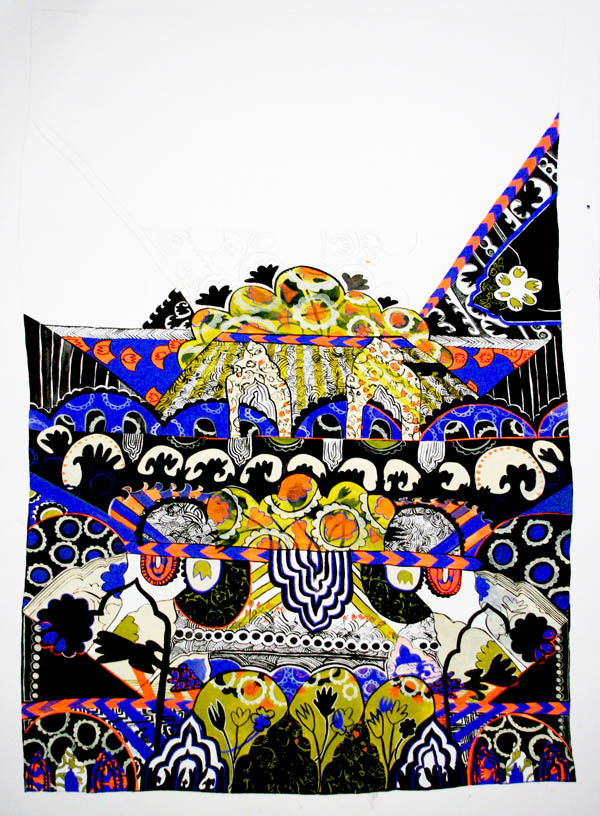 It reminds me of something created in and even depicting another world, one with its own dimensions and rules but rules nonetheless. When I look at it, I want to miniaturize myself and frolic. How cool would that be?

In addition to being an awesome painter, Kristen also decorates cakes for a living for a pretty famous and renowned bakery, the name of which rhymes with Spagnolia. It would be no shocker to anyone to say, I'm prouda this chick!

Andrew started his artistic endeavors by studying film editing but has since branched out to work in visual art, most recently involving photography so when I asked him about what he's working on now, he didn't hesitate to tell me about his work involving old found photographs. The "found" moniker is applied here, even though most of the photos he's working with lately are family photos but only because all of them carry the air of having just been found in an estate sale or a thrift shop. That they are especially personal makes what he's working on particularly interesting to me. Here's a sample, more of which can be found at his website if you click here 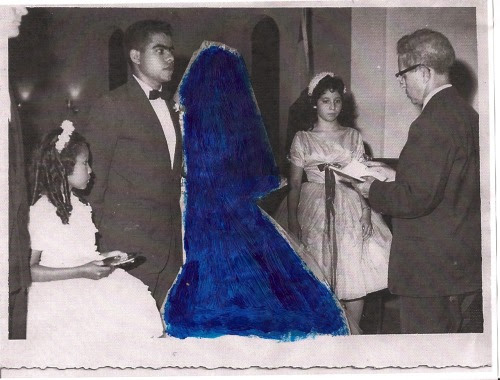 Our family recently suffered the loss of a very dear member who, while elderly and ill for some time, still left us all reeling. During the preparations for her funeral, Andrew found some old photographs of her and of my grandparents. Coincidentally, our grandmother was also recently diagnosed with Alzheimer's disease and the double whammy of all these things happening at the same time has informed his latest project of manipulating various photographs, stamping them with his unique design and in essence, enhancing the memory. As he told me the other night, looking at the old family photos, he got the impression that they could be anyone's family and that a few or even one more generation removed, who will remember who any of these people were or even who we are? The photographs that chronicle our lives accurately depict our actual lives in that they are temporal but they are what remain after we take our memories with us when we go. This notion was at the forefront of Andrew's mind after losing Mima and realizing that our grandmother is slowly dissolving in what seems to be one memory at a time. With these photographs, he's attempting to make the marks left behind darker, more permanent.

In many ways, Andrew is still, as we all are, discovering himself. When I see photos he's taken or worked with I feel so lucky to be witness to his discovery through art and his desire to illustrate these universal ideas through his own expression. It is impossible not to admire that.