The Pull of the Apple

Today at work, I wanted to go full on Bartleby, beginning in the first twenty minutes when I dealt with no less than three people who wanted exceptions made for them. Everyone wants to be the exception to the rule, they think surely "you can make an exception for me just this once." And it was all over the dumbest shit. 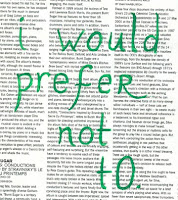 I did get introspective as a result of one woman's actions. She was inappropriately angry because she was sitting at a computer but had not logged in. At the library where I work, you have to log in almost immediately if you intend on using a computer, lest you lose it to someone making a reservation before you get a chance to. That's pretty much what happened. While she was busy sifting through her collection of about four hundred thousand papers, someone reserved the computer where she was sat. She angrily got up after I nicely told her that she was free to make a reservation for the next available one. She responded huffily saying "Didn't you see me sitting there? Can't you override the reservation system?"
Me: "No."
Her: "I don't see why not."
Me (in my head): Of course you can't see why not. You can't see past your pressing need to use the library's computer to print out more pieces of paper to stuff inside your rotting old purse. It is inconvenient for you to wait five minutes so that prevents you from seeing why the rules can't bend for you.
Me (out loud): "I'm sorry, I can't. But I can help you make a reservation."
Her: "I can't believe how mean people have become. I cannot wait to leave this place."

Now that last line of hers may provoke sympathy in you but rest assured, she basically spat it out as she looked me up and down with utter disgust. She then proceeded to make a few phone calls as she hovered near the computers. During the phone calls, I heard her "story" about how horrible it was to have to get up from the computer when "clearly" she was waiting to use it as she related it to a few people in her contacts list. I noticed that while all this was going on, about three computers became available but she did not notice, what with her ceaseless, complaining phone calls to make.

And I thought about how so many of us do this kind of thing. We want something, sometimes badly. It doesn't matter how small or stupid it is in the long run. We want it and when we are told we can't have it, we spend a  long amount of time complaining or lamenting or just in general letting our disappointment over not having what we want turn us into raging assholes. And while we are busy "sticking to our guns" and telling everyone who will listen how UNFAIR it all is, opportunities are opening up and we are ignoring them. We are too busy being negative about what we don't have to really notice that something else is opening up to us. I do it too. I do it often, unfortunately but I think that is only because I am usually so certain of what I want that when it doesn't work out, I'm either devastated or full of despair. I would love to stop that behavior, if only because I cannot count how many times I am able to look back say "Phew. I dodged a bullet there. Thank god it didn't work out like I originally wanted it to."

I want to move to the city but I have quite awhile before that will even be feasible. Instead of always bitching about it, I'm going to try to enjoy it here while I'm here. This is a recurring theme in my life and, consequently, this blog: my coming to terms with being here now. What can I say? It is a life long struggle. That's what bitchy lady taught me, through her ridiculous reaction. Thanks, bitchy lady.

Unfortunately, she also began a pattern of negative library patrons that lasted all the way until about five minutes before closing. Everyone wanted everything, last minute. The self centered part of me thinks this is because it was my last working day before a week long vacation. However, I'll forget all those minor ills by the time I finish typing this paragraph because I'll be off for an entire week from both jobs! See? Done.

Last night I met up with Marianne and Rob for a drink and some dinner during one of our town's summer street festivals. It seemed suspiciously empty until we went to dinner where apparently every person under the age of 30 decided to have a beer. It was like being in the middle of Times Square, only boozier. Also, 89% of the men were wearing the same thing: black t-shirt and khaki shorts. I swear I was expecting it to turn into some kind of uniformed flash mob.

At dinner we discussed politics a little which again, was a pleasure because we all agree on our politics. It is always fun to be agreed with. Also, I finally felt Marianne's baby kick which has been a source of fascination for me. It was the sweet potato fries that did it for him.

In true, I'm late to the party fashion, I got my first iPhone yesterday. Getting it was a bit annoying but I defy you to share one cell phone purchasing experience that wasn't annoying. Ma Bell set the stage for the arrogance and outlandish behavior of every phone company I've ever dealt with but what can you do? However, I love the phone more than I thought I would but I have vowed not to become constantly mesmerized by it, only because I can feel the pull of the apple, beckoning me with shiny lights and cool features and apps and something called Facetime. Hours upon hours of entertainment await me in that little handheld rectangle. I just need to tread lightly.

And right now, on the eve of many days in a row off, I sit in my apartment (which has become self aware and is now actively petitioning me to clean it) full of Greek salad and really trying to overcome this damn cold. Tomorrow I'm going dress shopping with Marianne and just like the damn girl that I am, I can't wait.
Posted by Allison E at 10:43 PM